Epic Drives of the World 1 (Hardcover) 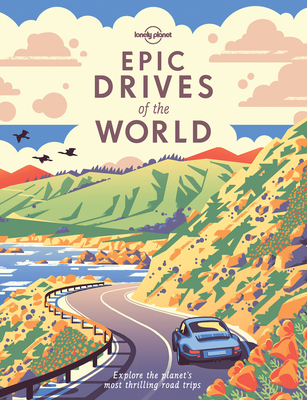 Buckle up for the next installment in our 'Epic' series and the follow-up to Epic Bike Rides of the World. Epic Drives of the World, abeautiful hardback, showcases 50 of the greatest road trips on Earth, from classic routes in America, Australia and Europe, to incredible adventures in Asia and Africa.

Organised by continent, each route features a first-hand account, awe-inspiring photographs, illustrated maps and practical advice on when to go, how to get there, where to stay and what to eat. From Hawaii's Hana Highway and Vietnam's Ho Chi Minh Road, to Utah's National Park Circuit and Germany's Black Forest High Road, Epic Drives of the World will inspire any motorist to hit the open road.

African and Middle East drives include:

The Americas drives include:

About Lonely Planet: Lonely Planet is a leading travel media company and the world's number one travel guidebook brand, providing both inspiring and trustworthy information for every kind of traveller since 1973. Over the past four decades, we've printed over 145 million guidebooks and phrasebooks for 120 languages, and grown a dedicated, passionate global community of travellers. You'll also find our content online, and in mobile apps, video, 14 languages, 12 international magazines, armchair and lifestyle books, ebooks, and more, enabling you to explore every day. Lonely Planet enables the curious to experience the world fully and to truly get to the heart of the places they find themselves, near or far from home.

'Lonely Planet guides are, quite simply, like no other.' - New York Times

'Lonely Planet. It's on everyone's bookshelves, it's in every traveller's hands. It's on mobile phones. It's on the Internet. It's everywhere, and it's telling entire generations of people how to travel the world.' - Fairfax Media (Australia)

"In 'Epic Drives of the World' (328 pages, $35), Lonely Planet serves up a collection of journeys through geography, geology and cultures of astonishing grandeur, from the Belfast loop to the Captain Cook Highway to Iceland’s Ring Road. Each story is flanked by gorgeous images for inspiration, as well as practical information for those inspired enough to go."—SF Chronicle

"The pit crew at Lonely Planet have put together a terrific new gift book for roadtrip-loving readers...[it] details 50 sensational car trips on six continents. There’s just a single, simplified map offered for each drive (no need to print detailed driving directions anymore), but loads of evocative description and photographs that capture the essence of the adventures."—Passport Magazine

"Lonely Planet's driving special is a feast for the eyes, with both fantastic photography and endearing illustrations accompanying 200 great drives across six continents. As a book to inspire, there isn't much quite like it. You'll conclude you absolutely must visit Zambia in a Toyota Landcruiser."—Classic Car Weekly

"This is a dreamer's book. The pictures are beautiful and you will feel compelled to start planning your trip before ou close the book."—The Manly Daily

"Lonely Planet's driving special is a feast for the eyes, with both fantastic photography and endearing illustrations accompanying 200 great drives across six continents"—Classic Car weekly

"Epic Drives of the World caught my attention. It's a new, beautiful book issued by Lonely Planet, one of the best travel-oriented publishers. What's inside is a collection of 50 journeys, another 200 ideas for great motoring and hundreds of breathtaking photographs from across the globe... For those compiling a travel bucket list or for for those simply interested in other cultures and landscapes, this book is inspiring and well worth the time to peruse stunning photographs and read fascinating stories and facts. And for those eager to hit the road, this book is a wonderful temptation."—News Tribune