Unsolved Mysteries of World War II: From the Nazi Ghost Train and 'Tokyo Rose' to the Day Los Angeles Was Attacked by Phantom Fighters (Paperback) 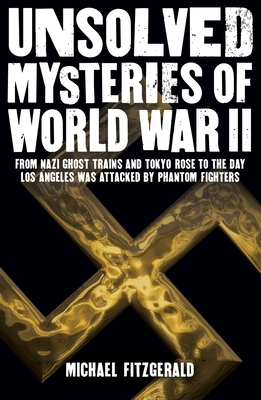 During World War II, many deeply mysterious events took place in the fog and chaos of conflict. These were classified, hushed up and kept from the public eye, and yet with the recent opening of secret archives, new light has been shed on these strange circumstances. This brilliant book fills you in on these unsolved cases, teasing fact from fiction.

Topics include:
- The lost treasure of the Amber Room - a masterpiece made from 5,900 kg of amber which was supposedly spirited away to a secret location and never uncovered since.
- The Man Who Never Was - a corpse dressed in military uniform, fitted out with fake documents who was deliberately allowed to fall into Nazi hands. His real identity is still disputed.
- The murder of socialite and possible spy, Jane Horney. Her body was never discovered, and many believed she swapped identities with her friend and lookalike before her disappearance. Within these pages the reader will also discover the secrets of the Nazi Ghost Trains; the 17 British soldiers at Auschwitz; and 'the curse of Timur's Tomb'. These intriguing and often chilling conspiracies and subterfuges will leave you stunned.

Michael FitzGerald is the author of numerous history titles, including Storm Troopers of Satan: An Occult History of the Second World War; Adolf Hitler: A Portrait; and American Destiny: From Adam to Obama. In 2008 he was the principal speaker in Dark Fellowships: The Vril Society, a television programme made for the Discovery Channel. He has also acted as consultant on a Japanese television programme about Ellic Howe and Nazi psychic research.