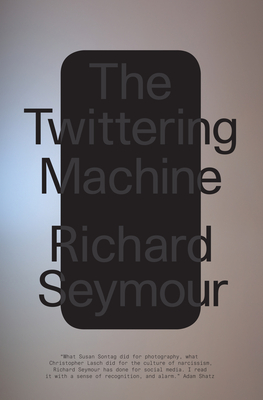 Former social media executives tell us that the system is an addiction-machine. We are users, waiting for our next hit as we like, comment and share. We write to the machine as individuals, but it responds by aggregating our fantasies, desires and frailties into data, and returning them to us as a commodity experience.

The Twittering Machine is an unflinching view into the calamities of digital life: the circus of online trolling, flourishing alt-right subcultures, pervasive corporate surveillance, and the virtual data mines of Facebook and Google where we spend considerable portions of our free time. In this polemical tour de force, Richard Seymour shows how the digital world is changing the ways we speak, write, and think.

Through journalism, psychoanalytic reflection and insights from users, developers, security experts and others, Seymour probes the human side of the machine, asking what we’re getting out of it, and what we’re getting into. Social media held out the promise that we could make our own history–to what extent did we choose the nightmare that it has become?
Richard Seymour is a writer, broadcaster and socialist, currently based in London. He writes regularly for the Guardian, the London Review of Books, Jacobin and many other publications.
“What Susan Sontag did for photography, what Christopher Lasch did for the culture of narcissism, Richard Seymour has done for social media. I read it with a sense of recognition, and alarm.”
—Adam Shatz, contributing editor at the London Review of Books

“One of our most astute political analysts.”
—China Miéville, author of October

“A bracing tour through the social and political context and impact of Twitter and Facebook, exploring Gamergate to Isis to Trump’s Twitter presidency. He recounts horrifying miseries—suicides on YouTube, rapes on Periscope, streamed shootings on Facebook—created by people radicalised, or tormented by online peers, craving celebrity—all pushed to extremes by algorithms and monetised by tech companies.”
—Emma Jacobs, Financial Times

“The book is a thrilling demonstration of what such resistance can look like, by one of the most clear-sighted and unyielding critics writing today. We should all read it.”
—William Davies, Guardian

“Richard Seymour has a brilliant mind and a compelling style. Everything he writes is worth reading.”
—Gary Younge, author of Another Day in the Death of America

“A sophisticated critique of the age of social media.”
—Kirkus Reviews

“Rather than wondering ponderously if this is ‘cancel culture’ or whatever, we might ask ourselves: Why were all these people tweeting? … This is not a book with an accompanying TED Talk, a ten-step program, or One Weird Trick to Fix Everything. Seymour’s pose here is that of a working analyst, not a confident diagnostician. He draws connections, he sketches notes toward a further diagnosis.”
—Max Read, Bookforum

“The Twittering Machine understands our world as it is: shaped for better or worse by sophisticated, online, social technologies that developed in the context of a long human history of other technologies.”
—Damon Beres, OneZero

“Seymour is wide-ranging in his analysis of the destructive effects of the ‘social industry’ on personal and political life … By the end, if you weren’t already, you will be on the verge of deleting your Twitter account. And yet Seymour himself is still on there, professionally compelled as a freelance writer to plug into the machine.”
—Matthew Sperling, Guardian

“A very brilliant deconstruction of social media and our death drive to engage with it … What’s so useful about the book is that it dispenses with the platitudes we tend to hear about social media, and takes a psychoanalytical approach to social media that feels fresh and freshly horrifying.”
—Los Angeles Review of Books

“Incisive … [The Twittering Machine contains] a number of penetrating insights into the nature and effects of social media.”
—Daniel Bessner, Nation