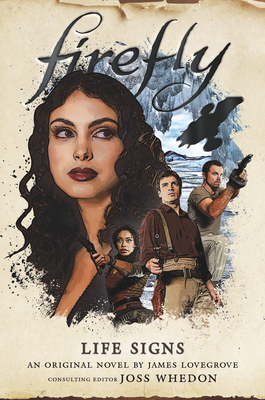 A deadly disease
Months after Inara leaves Serenity, Mal and the crew finally learn the reason for her sudden departure: she is dying of a terminal illness. It is Kiehl’s Myeloma, a form of cancer that’s supposedly incurable, and Inara has very little time left.

A disreputable scientist
Through their shock and despair, rumors of a cure reach the crew. Expert Esau Weng is said to have developed a means to treat Inara’s condition, but he has been disgraced and incarcerated for life on a notorious Alliance prison planet.

An infamous prison
On the planet of Atata, inmates are abandoned with no guards and left to survive as best they can. What’s more, terraforming the planet did not take properly, so the world is a frozen wasteland. To save Inara, the Serenity crew must infiltrate the prison…

James Lovegrove is the New York Times bestselling author of The Age of Odin. He has been short-listed for many awards including the Arthur C. Clarke Award, the John W. Campbell Memorial Award, and the Scribe Award. He won the Seiun Award for Best Foreign Language Short Story in 2011, and the Dragon Award in 2020 for Firefly: The Ghost Machine. He has written many acclaimed Sherlock Holmes novels, including Sherlock Holmes & the Christmas Demon. As well as writing books, he also reviews fiction for the Financial Times. He lives in Eastbourne in the UK.

PRAISE FOR THE SERIES

"The entire novel feels like it could be a lost episode from the show." – The Verge

"Illuminates not only a huge chunk of Mal's past but also showcases a perfectly plausible chapter in the adventures of the Serenity's crew." - The Frumious Consortium

"Fans who know the 'verse well...will feel right at home in this story that spans the era before the series, with callbacks to events in the series, and right afterward as if it were a 15th episode." - Borg.com

"For someone who genuinely enjoyed the Firefly ‘verse, this was a treat to read." - Editing Everything

"An outstanding tie-in to the beloved TV series, this book is shiny in every way possible." - Books Bones & Buffy

"This was a wild ride back into the world of Firefly that I sorely missed; I loved learning some of the backstory that Fox robbed us from fifteen years ago and look forward to the next installment." - Reader Voracious

"Big Damn Hero absolutely nails it across the board for me...It brings back all of the familiar and beloved while adding in dashes of the new and unknown. This Firefly book is a no-brainer buy for fans of the franchise." - Nerds on Earth