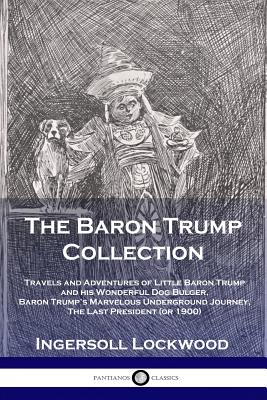 Filled with exotic flights of fancy, the Baron Trump tales feature the titular character - a wealthy boy who lives in Trump Castle. His actual name is Wilhelm Heinrich Sebastian Von Troomp, but for the sake of simplicity he chooses to go by his title of Baron Trump.

The young fellow embarks on time travelling adventures through human history. Through his travels, he meets societies of people and tribes from long ago, picking up aspects of their language and social customs. Accompanied by his faithful and protective companion hound Bulger, the young Baron navigates a variety of adventures and surmounts many obstacles.

The final book in this volume discusses the rise of a US President and has been variously described as either coincidental or prescient of aspects of the 21st century political climate. Set in an America torn by division and dissent, there are references to a hotel on Fifth Avenue in New York, and an election of an outsider candidate ensuing in a chaotic atmosphere.

Ingersoll Lockwood was an author of many children's books and short stories. A veteran of the U.S. consular service, he began writing in the 1870s and attained fame and appreciation for his efforts.