Principles of Geology: The Three Books - Complete in One Edition with Diagrams; The Modern Changes of the Earth and Its Inhabitants Considere (Paperback) 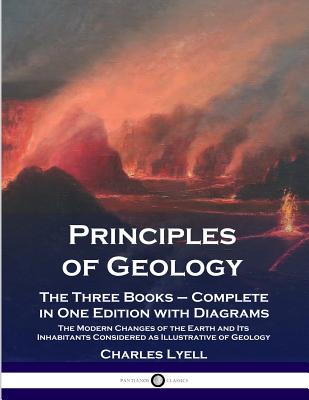 Charles Lyell introduces geology, explaining the characteristics of the Earth and its minerals, and how time affects change over the ages. This edition unites the three books, and appends over 100 diagrams, drawings and charts.

Written in the mid-19th century, many of Lyell's points and observations have since been refined or superseded by improvements in the science. However, his examination of geologic phenomena, his astute evaluations of the natural world, and reasoned explanations of events such as volcanic eruptions and earthquakes, made Lyell one of the most respected geologists of his era.

Much of Lyell's work was based upon the groundbreaking ideas of his forerunner James Hutton. However he also was a pioneer in several respects; his work on volcanoes included a correct hypothesis that their buildup is gradual, and he introduced a more accurate system of geologic eras. He also possessed expertise on biological elements of geology - namely how fossilized creatures offer glimpses into the ancient Earth as well as the evolution of life.

Many of the author's subjects are made clearer by accompanying diagrams, while expeditions are accompanied by maps that clarify the land. Frequently, the author will narrate these images which are labelled with letters and numbers. Thus the reader receives excellent and easy-to-follow analyses of a given phenomena, be it an erupting volcano or an ancient fossil.

Principles of Geology was among the first texts in the field to benefit from the ability of scientists to travel widely. Investigations of the Mississippi river, of the volcanic regions of Naples, and even a fledgling examination of coral reefs, populate this book. For the first time, the discoveries of geology were compared and validated with others, vast distances away. This ability led to further development and validation of models and theories proposed by Lyell and others, as this book evidences.