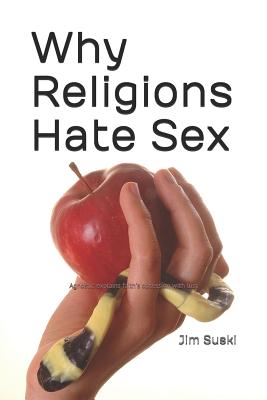 The story of Religion's role - in sex, power and empire building.
Before religion was invented people had only a mild curiosity and inquisitiveness about spirituality - they wondered about nature, the stars, the meaning of life, but not obsessively - some mysticism here, a bit of superstition there, and then onto more important things. For 99.8% of human existence, people lived pretty much the same way: in small intimate groups, surviving as nomadic hunter-gatherers - free of inhibitions and with their own rules for sex and love. Sex was frequent and with multiple partners, paternity was uncertain. As a result, all children were treated by the men as if they were their own - to be equally protected, fed and loved.
A few thousand years ago people started farming; the food supply became more reliable. Suddenly resources stopped belonging to everybody, and things started belonging to individuals. People invented the concept of private property: people invented wealth. Men became obsessed with keeping their "wealth" - they became determined to ensure that others did not come and take what was rightfully theirs.
The obsession for private property had taken hold, and the farmer was horrified by the idea of an unworthy stranger taking his hard-earned property after he died. Men became obsessed with making sure that their children, and only their children, inherited their property - men had to make sure that only they impregnated "their" woman. - Women's sexuality had to be strictly controlled.
The new concepts were strange to early humans who had only recently been accustomed to sharing food and love - sexual intolerance, greed, cruelty and violence are not part of human nature. Something was needed to overcome people's tolerant, peaceful, easy-going nature. And so the people that ruled invented religions to support their property-owning society.
The Old Testament is fascinated on the point of property ownership; and obsessed with heredity, genealogy and lineage. - It never stops talking about who owns what land, and about who is whose father. Homosexuality is very rarely mentioned in the Bible. - The persecution of homosexuals did not start until the late Middle Ages. The reason for banning homosexuality was the constant wars over property, societies were in an "arms race" - they had to get larger and larger armies. The ranks needed constant replenishment: children were needed to make soldiers for "cannon fodder." Every sperm was sacred: it was decided that homosexuality must be discouraged - men should spend their energy on fathering sons - and not on idle, unproductive fun.
The trouble was that the books of the Old Testament encouraged individualism - people were becoming too self-confident and argumentative. So Jesus was invented. His message was the philosophy of obedience, passivity and apathy in the face of suffering: "be meek," accept your place in society and obey your elders and rulers. "Suffer in silence and you will get your reward in the next world" - that was the new message of the Jesus story. And by creating a population of materialistic, property loving "lambs," the rulers of Western Europe were able to conquer and rule the world. - The Christian nations came to dominate and enslave all other societies and all other communities.
This is why today, agnosticism, humanism and skeptics argue for a secular, atheist society.