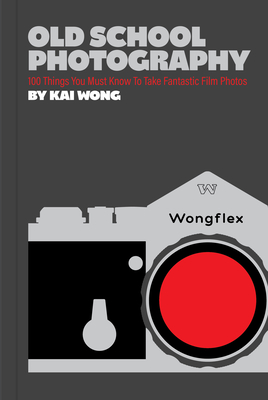 
Usually Ships in 1-5 Days
Old School Photography is a must-have modern manual for learning how to create great photographs with a 35mm film camera. Famed YouTube personality Kai Wong expertly and humorously shares 100 essential tips for selecting and using film cameras, shooting with film and various lenses, and employing specific techniques to ensure you can get great results quickly. Known for his breadth of knowledge and quick wit, Kai Wong delivers an informative and entertaining read on how to take great film photos.

Renewed interest in film photography has surged in the past few years, both among those rediscovering their past passion and those discovering it for the first time. Vintage cameras that had previously lost their value are now often worth more than they first sold for due to high demand amongst enthusiasts, students, and collectors. Film manufacturers have even started reissuing long discontinued stocks—for example, Kodak's much-loved and recently re-released classic Ektachrome slide film. In our modern world, billions of people have access to instantaneous photography on their mobile phones, but as a result there has been a resurgent desire for a more tactile, physical, unaltered, and thus honest medium. Much of which, ironically, ends up on the internet, with photography fans and influencers sharing their images across Instagram, Flickr, YouTube, and the like.

More so than with digital photography, film photography requires a sense of craft, skill, patience, technical knowledge, and a trial-and-error process that results in a greater sense of accomplishment. Old School Photography is both enlightening and humorous, and attracts a new generation of fans who are eager to experiment with film cameras, make prints, and post their film photographs online.
Kai Wong shares insights on using film and digital cameras each week via his YouTube channel, that has nearly a million subscribers and over 67 million views worldwide. Kai was born and raised in the United Kingdom and studied film and media at Manchester Metropolitan University. Follow Kai on YouTube or Instagram @kaimanwong.