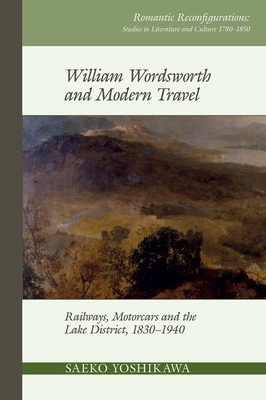 
Coming Soon - Available for Pre-Order Now
This book explores Wordsworths extraordinary influence on the tourist landscapes of the Lake District throughout the age of railways, motorcars and the First World War. It reveals how Wordsworths response to railways was not a straightforward matter of opposition and protest; his ideas were taken up by both advocates and opponents of railways, and through their controversies had a surprising impact on the earliest motorists as they sought a language to describe the liberty and independence of their new mode of transport. Once the age of motoring was underway, the outbreak of the First World War encouraged British people to connect Wordsworths patriotic passion with his wish to protect the Lake District as a national heritage a transition that would have momentous effects in the interwar period, when popular motoring paradoxically brought a vogue for open-air activities and a renewal of romantic pedestrianism. With the arrival of global tourism, preservation of the cultural
landscape of the Lake District became an urgent national and international concern. This book explores how patterns of tourist behaviour and environmental awareness changed in the century of popular tourism, examining how Wordsworths vision and language shaped modern ideas of travel, self-reliance, landscape and environment, cultural heritage, preservation and accessibility.

Saeko Yoshikawa is a professor in the Department of English Studies at Kobe City University of Foreign Studies, Japan.