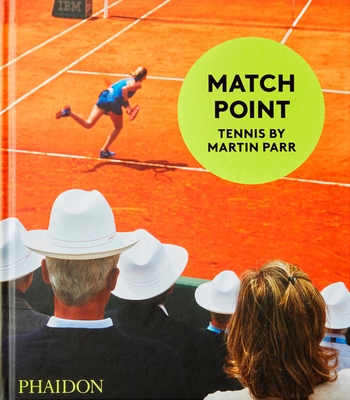 By Martin Parr (By (photographer)), Sabina Jaskot-Gill (Introduction by), Francesca Lavazza (Contributions by)

Anyone for tennis? Much loved photographer Martin Parr's unique and evocative pictures capture the spectacle of a year at the Grand Slam tournaments through 85 stunning images

Since 2014, Martin Parr, one of Britain's best-loved photographers, has been granted exclusive behind-the-scenes access to the most prestigious Grand Slam tennis tournaments - followed by over 3 million fans each year - from the Australian and French Opens to Wimbledon and the US Open.

Parr's vivid shots, sometimes poignant, often hilarious, provide a unique overview of life on and off the court, from players to picnickers, sun-hats, and visors to rain-stopped-play. With 85 photographs from a brand new body of work, many published here for the first time, this is an ace gift for all tennis fanatics, collectors, and fans of pop-culture photography.

Since the 1970s, Martin Parr's distinctive style has established his position as a leading cultural commentator on subjects ranging from consumerism and British identity to the art of the self-portrait. His insight and originality are universally admired and Parr has published over 80 photobooks, with his work having been recognized with major awards and over 100 exhibitions worldwide.

Sabina Jaskot-Gill is Curator of Photographs at the National Portrait Gallery, London. Previously, Sabina lectured on the history and theory of photography at Sotheby's Institute of Art and she has held positions at Tate, Autograph ABP and the University for the Creative Arts.

Included in the Strategist’s “Most Giftable Coffee-Table Books”