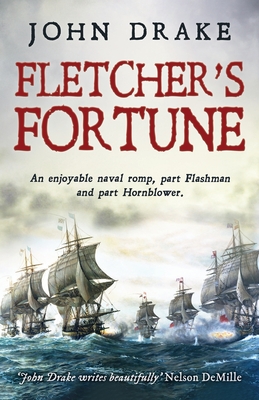 Young Jacob Fletcher, whilst unsure of his parentage, did know that as an apprentice he couldn't legally be seized by the press gang.

But this particular gang couldn't actually read the rules. And didn't care anyway.

Which was how he found himself risking life, limb and sea sickness on board His Majesty's frigate Phiandra, about to do battle with what looked like half the French fleet.

Meanwhile at Coignwood Hall, the late Sir Henry lay face-down in his soup as his beautiful but evil widow, Lady Sarah, along with their two loathsome sons, ransacked his papers for the will that would disclose to their horror that the entire family fortune has been left to a previously unknown illegitimate son.

Who would now have to be tracked down and disposed of as a matter of some urgency...

What will become of Fletcher's fortune?

Fletcher's Fortune is the first in a rollicking series of fictional memoirs that bring the 18th century back to life in its tawdry glory.

'Broad comedy, high drama, plenty of action, a pinch of sex ... the genre has room for this cheerily debunking outsider' - Daily Mail

'Swashbuckling adventure on the high seas doesn't get much better than this. ...] John Drake writes beautifully, and you'll be torn between savoring the words and quickly flipping the pages. Any favorable comparison to Stevenson or Patrick O'Brian is totally justified.' - Nelson DeMille, #1 New York Times bestselling author.

John Drake trained as a biochemist to post-doctorate research level before realizing he was no good at science. His working career was in the television department of ICI until 1999 when he became a full-time writer. John's hobby is muzzle-loading shooting, and his interests are British history and British politics (as a spectator), plus newspapers, TV news, and current affairs. He is married with a son and two grandchildren.