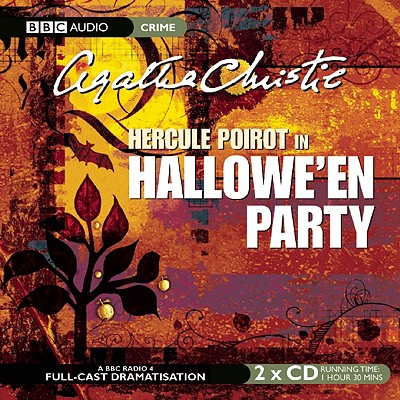 Famous crime novelist Ariadne Oliver, visiting her friend Judith Butler in the little town of Woodleigh Common, is invited to a Halloween Party put on by society hostess Mrs. Rowena Drake for the local teenagers. During her preparations for the party, the conversation turns to Ariadne's grisly novels. One of the teenagers, Joyce Reynolds, boasts that she once witnessed a murder, although she didn't realize at the time what she'd seen. Convinced that she is just trying to attract attention, no one believes her but later she is found tragically drowned in an apple-bobbing tub. Distraught, Ariadne decides to call upon the services of her old friend Hercule Poirot to solve the case. Assuming that Joyce was killed because of what she said, Poirot knows he must find out if the teenager was telling the truth. If so, there is not just one death for him to investigate, but two. . . Starring John Moffatt as Hercule Poirot, with Stephanie Cole as Ariadne Oliver.

Agatha Christie was born in 1890. During the World War I she worked as a hospital dispenser, where she gleaned the working knowledge of various poisons. Her first novel was The Mysterious Affair at Styles, published in 1920, followed over the next six years by four more detective novels and a short story collection. However, it was not until the publication of The Murder of Roger Ackroyd that Agatha Christie s reputation was firmly established. In 1930 the sharp-witted spinster sleuth Miss Marple made her first appearance in Murder at the Vicarage. In all, Agatha Christie published 80 crime novels and short story collections. As her play The Mousetrap (the longest-running play in the history of the theater) testifies, Agatha Christie s detective stories are likely to appeal for a long time to come. Agatha Christie was awarded a CBE in 1956 and was made a Dame of the British Empire in 1971. She died in 1976."