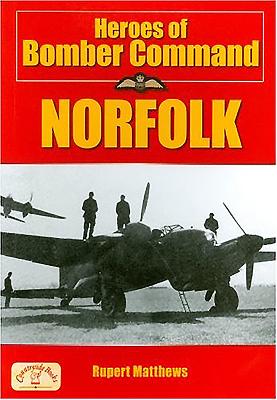 
Email or call for price.
Norfolk was one of the most important counties used by Bomber Command in the last war. From airfields in Norfolk such as Swanton Morley, Marham, Downham Market and Watton, crews flew almost suicidal operations, many in daylight and some at heights of 50 feet or lower, against heavily defended industrial installations in Germany and occupied Europe. The bomber crews were engaged in a special type of warfare; a matter of hours separated them from the relative peace and tranquility of the English countryside and a flight into hell. They had to contend with adverse weather, intense cold, physical and mental fatigue, phalanxes of searchlights, heavy and intense flak and the Luftwaffe's night-fighters, before returning, if they were lucky, across a hostile North Sea often in damaged aircraft before landing safely; a blessed return to some form of normality but with the sure and certain knowledge that the next night they would face such horrors again, and again and again until their tours were completed or their luck deserted them and they did not return, like so many of their friends and colleagues. Despite this they did not receive any special Campaign medal. Winston Churchill himself was moved to write that "The charge of the Light Brigade at Balaclava is eclipsed in brightness by their daily deeds of fame." In this well-researched and excellently written book, Rupert Matthews - himself the son of a Bomber Command sergeant stationed at Swanton Morley - describes many of the raids in detail and tells the story of courageous individuals who, despite the odds, flew mission after mission - heroes everyone of them. Rupert Matthews is a well established author with a particular interest in military history. He is also the author of Heroes of Bomber Command Lincolnshire.