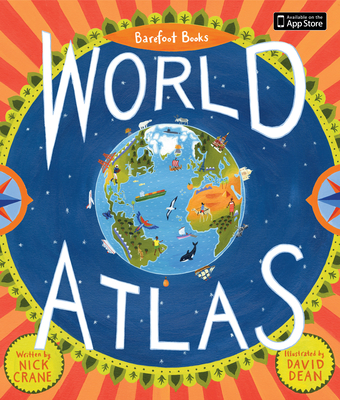 
Usually Ships in 1-5 Days
This is the atlas for twenty-first-century readers. It's packed with information about the way in which communities and cultures around the world have been shaped by their local environments, and it looks at the ideas and initiatives that are shaping the future.
Nick Crane is a writer and well-loved television presenter. In 1992-3, he walked 6,214 miles across Europe, from the Atlantic Ocean to the Black Sea, an experience which he describes in his book Clear Waters Rising. Among his many other projects is Mercator: the Man Who Mapped the Planet, the definitive biography of Gerard Mercator, the 16th-century map maker who invented the atlas. As a child, Nick spent many hours exploring the Norfolk countryside with a bicycle and a map; he has been traveling the world ever since. He lives with his family in London, England. David Dean is a full-time illustrator who is enjoying his mission of traveling the world from the comfort of his own studio. Known for his exotic and colorful work, David works in a room surrounded by books from many different cultures, from which he finds inspiration. In his spare time, David enjoys walking the countryside near his house in Cheshire, England, taking photographs of the things he sees.