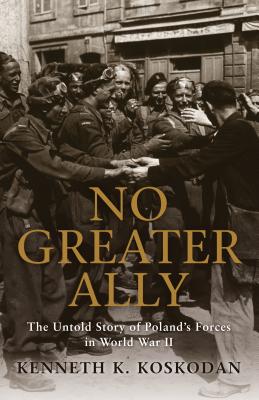 There is a chapter of World War 2 history that remains largely untold: the story of the fourth largest Allied military of the war, and the only nation to have fought in the battles of Leningrad, Arnhem, Tobruk and Normandy. This is the story of the Polish forces during the Second World War, the story of millions of young men and women who gave everything for freedom and in the final victory lost all. In a cruel twist of history, the monumental struggles of an entire nation have been largely forgotten, and even intentionally obscured.

Available for the first time in paperback, No Greater Ally redresses the balance, giving a comprehensive overview of Poland's participation in World War 2. Following their valiant but doomed defense of Poland in 1939, members of the Polish armed forces fought with the Allies wherever and however they could. With previously unpublished first-hand accounts, information never before seen in English, and rare photographs, this title provides a detailed analysis of the devastation the war brought to Poland, and the final betrayal when, having fought for freedom for six long years, Poland was handed to the Soviet Union.

Ken Koskodan graduated from Michigan State University with a degree in Communications. The emphasis of his degree was in Journalism, Advertising and Public Relations. Of Polish descent himself, he has researched Poland's participation in World War II for many years, and in the course of his research has interviewed many surviving veterans. This is his first book. The author lives in Detroit, MI.

“This fascinating book fills a yawning gap in our knowledge of the Second World War. By bringing in the personal reminiscences of people of all stations, the author gives pace and immediacy to this extraordinary story.” —Adam Zamoyski, author of Forgotten Few: The Polish Air Force in World War II

“No Greater Ally is an absolutely crucial contribution to the history of the Second World War. Anybody who seeks to understand the dynamics of betrayal and resistance as they apply to this period, in Poland, in Europe, must read this book.” —Alan Furst, author of The Polish Soldier

“I hadn't realised, before reading this outstanding book, just how crucial the Polish contribution to [Allied] victory actually was. If it hadn't been for their pilots, for instance, we might well have lost the Battle of Britain...” —Henry Coningsby, Waterstones