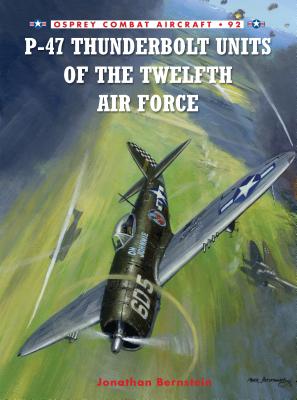 This is book number 92 in the Combat Aircraft series.

The P-47 Thunderbolt, originally designed as a high-altitude interceptor, became the principle US fighter-bomber of World War 2. First adapted to the ground attack role by units of the Twelfth Air Force in early 1944, the strength and durability of the P-47 airframe, along with its massive size, earned it the nickname 'Juggernaut', which was quickly shortened to 'Jug' throughout the MTO and ETO. Twelfth Air Force fighter groups had done a superb job flying both tactical strike missions and bomber escort in the P-40F since late 1942. The sturdy and capable Curtiss fighter served well as a fighter-bomber, but still remained susceptible to ground fire due to its liquid-cooled inline engine. Alongside the Twelfth's P-40 units, an additional two fighter groups flew the A-36 dive-bomber version of the P-51 Mustang and several others employed the twin-engined P-38 and mid-engined P-39. By October 1943, with the creation of the Fifteenth Air Force, nearly half of the Twelfth's fighter groups would be re-tasked with strategic escort missions, leaving six groups to perform close air support and interdiction missions throughout the entire Mediterranean theatre. The remaining P-40 and A-36 groups began refitting with the P-47 in the early spring of 1944 and were the first to use the 'Jug' in the ground support role, creating many of the tactics, techniques and procedures that would become standardised throughout the USAAF's tactical air forces. The group's inflicted incredible damage on the enemy's transport routes in particular, using rockets, bombs, napalm and machine gun rounds to down bridges, blow up tunnels and strafe trains. Myriad firsthand accounts and period photography reveal the spectacular success enjoyed by the Thunderbolt in the MTO in the final year of the war.
Jonathan Bernstein is an aviation author, historian, former attack helicopter pilot and current director of the US Army Air Defense Artillery Museum. He is the author of three Osprey Combat Aircraft volumes, and has also had books published by Squadron/Signal Publications and Elephant Books. Jonathan is a frequent contributor to National Guard Magazine, Supply Line and Armor Journal.

“The focus on this plane includes technical and military battle details alike, following its missions in the Twelfth Air Force and considering its tactical air involvements. Almost nothing has been written on the Twelfth Air Force fighter-bomber operations, making this focus a 'must.'” —James A. Cox, The Midwest Book Review (August 2012)