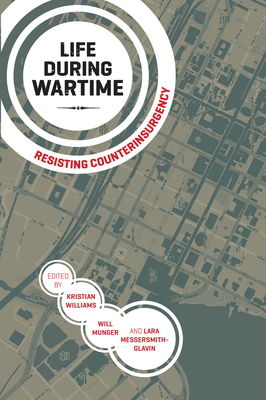 
Usually Ships in 1-5 Days
Together, the writers sound a sobering warning: the American government is an iron fist in a velvet glove whose purpose remains preserving the status quo and enriching the rich.-- Publishers Weekly

What happens when the techniques of counterinsurgency, developed to squash small skirmishes and guerrilla wars on the border of Empire, blend into the state's apparatus for domestic policing? In Life During Wartime, fifteen authors and activists reflect on the American domestic security apparatus, detailing the increasing militarization of the police force and the re-emergence of infiltration and counter-intelligence as surveillance strategies, highlighting the ways that the techniques and the technologies of counterinsurgency have been applied on the home front, and offering strategies for resistance.

Kristian Williams is the author of Our Enemies in Blue: Police and Power in America, American Methods: Torture and the Logic of Domination, Confrontations: Selected Journalism, and Hurt: Notes on Torture in a Modern Democracy. He has written about counterinsurgency and political repression for Counterpunch, Clamor, In These Times, Z Magazine, International Socialist Review, Labor Notes, Social Anarchism, the Earth First! Journal, Eat the State, PDXS, Dollars and Sense, and (perhaps oddly) The Comics Journal -- as well as in the introduction to the 2007 edition of The New State Repression. Lara Messersmith-Glavin is the founder and managing editor of the non-fiction journal Alltopia. Her own writing has appeared in Alltopia, Perspectives on Anarchist Theory, the Spoon Cafe Journal, and MaLa, the premier English-language literary and nonfiction journal of China. Her accounts of culture shock, education, the military response to a Tibetan uprising, and the Sichuan earthquake earned her the 2008 Chinalyst.com award for Best Travel Writing. Lara is on the board of directors for the Institute for Anarchist Studies, which seeks to further anarchist thought, solidarity, and practice by funding radical writers through grants, and providing opportunities for publication through Perspectives (now both online and in print form) and the Anarchist Interventions book series (produced in collaboration with AK Press). Will Munger is a member of the Life During Wartime editorial collective and also organized the 2011 Counter Counterinsurgency Convergence.