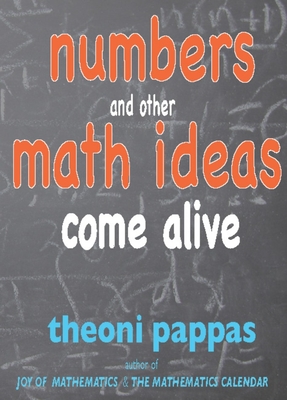 
Usually Ships in 1-5 Days
Most people don't think about numbers, or take them for granted. For the average person numbers are looked upon as cold, clinical, inanimate objects. Math ideas are viewed as something to get a job done or a problem solved. Get ready for a big surprise with Numbers and Other Math Ideas Come Alive. Pappas explores mathematical ideas by looking behind the scenes of what numbers, points, lines, and other concepts are saying and thinking. In each story, properties and characteristics of math ideas are entertainingly uncovered and explained through the dialogues and actions of its math characters. In fact, you forget that you are actually learning mathematics as you get caught up in the characters' private lives, secrets and how they interact with one another. You may even forget that these math actors come from the imaginary worlds of mathematics. They seem so real This is the crux of Numbers and Other Math Ideas Come Alive -- number and math ideas tell their own stories in their own words. As you read these stories you will be amazed at how math ideas come to life and develop their own personalities. We learn about their foibles and strengths, and see why mathematicians had to develop new concepts when the old ones were not sufficient for the problems at hand. You'll see how mathematics is constantly evolving. How new numbers appeared, and old ones were reticent to accept the newcomers. How certain math ideas lay hidden for centuries, until they were resurrected or discovered by a mathematician. Love, hate, jealousy, excitement--all emotions we associate with human behavior are taken on by these math characters. You will come away learning how indispensable these math ideas and their roles are in our world today.
Theoni Pappas is passionate about mathematics. A native Californian, Pappas received her B.A. from the University of California at Berkeley in 1966 and her M.A. from Stanford University in 1967. She taught high school and college mathematics for nearly two decades, then turned to writing a remarkable series of innovative books which reflect her commitment to demystifying mathematics and making the subject more approachable. Through her pithy, non-threatening and easily comprehensible style, she breaks down mathematical prejudices and barriers to help one realize that mathematics is a dynamic world of fascinating ideas that can be easily accessible to the layperson. Her various math calendars and over 15 math books appeal to both young and adult audiences and intrigue the "I hate math people" as well as math enthusiasts. Three of her books have been Book-of-the Month Club(TM) selections, and her Joy of Mathematics was selected as a Pick of the Paperbacks. Her books have been translated into Japanese, Finnish, French, Slovakian, Czech, Korean, Turkish, Russian, Thai, simplified and traditional Chinese, Portuguese, Italian, Vietnamese, and Spanish. In 2000 Pappas received the Excellence in Achievement Award from the University of California Alumni Association. In addition to mathematics Pappas enjoys the outdoors, especially the seashore where she has a home. There she bicycles, hikes and swims. Her other interests include watercolor painting, photography, music, cooking and gardening.