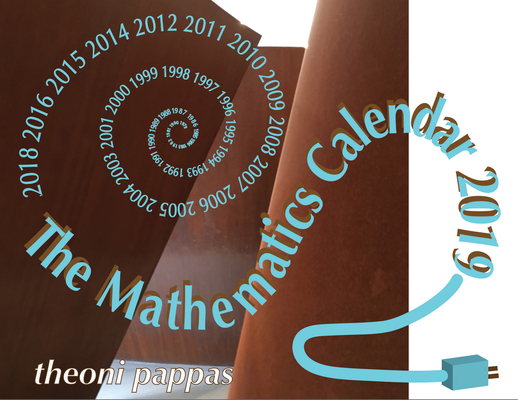 
Usually Ships in 1-5 Days
ORIGINAL. AUTHENTIC. Although there are other mathematics calendars by the same name, this is the original mathematics calendar first introduced to the public in 1979. Each problem's answer is designed to come out to the date on which it appears. In addition, every month presents current or popular math topics or ideas. It's more than a calendar, but instead, a mathematical calendar magazine. The Mathematics Calendar 2019 will be Pappas' farewell mathematics calendar. - A retrospective of problems spanning 38 years. Many past topics will be revisited, expanded and updated to reflect the ever evolving changes in the world of mathematics. As it has for nearly four decades, The Mathematics Calendar 2019 will inform, entertain, challenge and enrich. It will probably become collectible.--Theoni Pappas.
Theoni Pappas is passionate about mathematics. A native Californian, Pappas received her B.A. from the University of California, Berkeley, in 1966 and her M.A. from Stanford University in 1967. She taught high school and college mathematics for nearly two decades, then turned to writing a remarkable series of innovative books which reflect her commitment to demystifying mathematics and making the subject more approachable. Through her pithy, nonthreatening and easily comprehensible style, she breaks down mathematical prejudices and barriers to help one realize that mathematics is a dynamic world of fascinating ideas that can be easily accessible to the layperson. Her math calendars and over 19 math books appeal to both young and adult audiences alike. Three of her books have been Book-of-the Month Club selections, and her Joy of Mathematics was selected as a Pick of the Paperbacks. Her books have been translated into Japanese, Finnish, French, Slovakian, Czech, Korean, Turkish, Russian, Thai, simplified and traditional Chinese, Portuguese, Italian, Vietnamese, and Spanish. In 2000 Pappas received the Excellence in Achievement Award from the University of California Alumni Association for her work on books and other innovative products that deal with mathematics. She lives in Palo Alto, CA.