The Esai Poems (Breaking Bread with the Darkness #1) (Paperback) 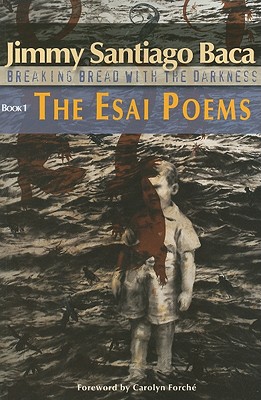 By Jimmy Santiago Baca, Carolyn Forch (Foreword by)
Email or call for price
Hard to Find

He wakes from his afternoon siesta, / flapping legs and hands, / a bluebird perched on the birch/ branch of mother's arm/ ready to raid/ cornfields/ in his father's heart/ THE ESAI POEMS is the first of four books under the series title of BREAKING BREAD WITH THE DARKNESS by American Book Award recipient Jimmy Santiago Baca. The Esai poems are a poignant blend of Baca's wonder of his and his partner's newborn son, and the thoughts and observations of the world he will be inheriting, includlding, including war, racism, indifference and greed. Through Esai the wonder-struck new father explores the idealic world of his family through Esai's new eyes, "He studies his hands as if they are newly discovered planets . . ." but realizing the harsh realities of our times adds perspective with juxtapositions: "I'll wait to tell him how in some places armies cut off the hands of rebels..." Written as a series of thematically connected and dated poems, moving back and forth between ideas, The Esai Poems are some of Baca's strongest poetic work. Already father of two grown sons, Baca explors the implications of beginning another family with another woman. Subsiquent volumes will include explorations of self and family with Essays and Stories, The Lucia Poems (to his young daugher), and to his son, Tones and Gabe Poems and Essays.