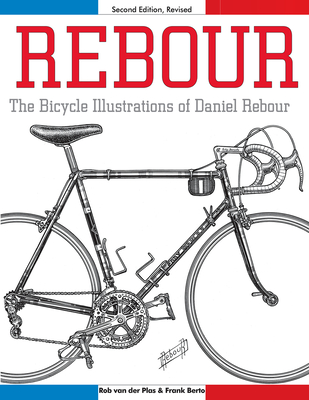 A compilation of high-quality illustrations of bicycles and bicycle components and accessories by the French master-illustrator Daniel Rebour. The book contains some 2,000 nicely rendered line drawings with captions explaining the function of the items depicted and references to each illustration's source. This second edition includes additional materials and corrections based on information that has become available since release of the first edition of the book, in 2014. In addition the book contains an updated biography of Daniel Rebour.

Rob van der Plas is the author of numerous books on cycling, including The Penguin Bicycle Handbook, The Mountain Bike Book, Bicycle Technology, and Bicycle Repair. He lives in San Francisco. He has been called as an expert witness in numerous cases involving bicycle-safety and patent disputes. Frank Berto is a mechanical engineer and bicycle historian, former technical editor of Bicycling Magazine. Consultant to Shimano and other bicycle and bicycle component manufacturers. He is the author of Bicycling Magazine's Complete Guide to Upgrading Your Bicycle and Birth of Dirt: The Origins of Mountain Biking. Daniel Rebour, 1908–1990, was an technical illustrator who specialized in highly detailed line-drawing illustrations of bicycle and motorcycles and their components. His work appeared in several French cycling periodicals, such as Le Cycle, and in product catalogues for bicycle and component manufacturers during the period 1945–1983.