Why All the Fuss?: Prevalence, Effects and Trends of Child Sexual Abuse (Predator-Proof Your Family #1) (Paperback) 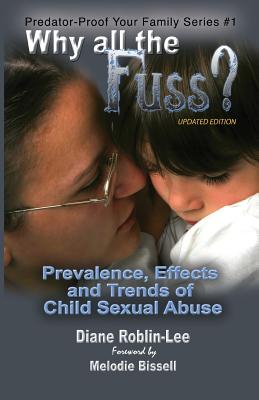 Why All the Fuss?: Prevalence, Effects and Trends of Child Sexual Abuse (Predator-Proof Your Family #1) (Paperback)

This is book number 1 in the Predator-Proof Your Family series.

How was it possible for Diane Roblin-Lee to have been married for 38 years without knowing that her husband, 13 years into the marriage, had begun to molest children?

The answer lies in the fact that child-molesters are such highly skilled manipulators that they can fool even a mate with whom they live - and convince a child that keeping the deep dark secret is critically important for both of them. They are usually so addicted to pornography that acting out the taunting perversions of their porn-soaked brains becomes the driving force of their lives.

Once the fog from the shock, betrayal, and shame of her husband's crimes began to clear, Diane wondered how any young mom could possibly be expected to protect her children from a predator - if she had lived with one for all those years and not recognized the signs.

Following her divorce, the sale of her home, and the dismantling of their business, Diane immersed herself in research and emerged with the Predator-Proof Your Family Series, breaking the silence in which predators hide. The publishing of this series of nine booklets is Diane's way of turning her brokenness, and that of her family, into information and protection for other children and other families.

Sexual abuse of children is becoming pandemic in our society. While it has been an issue since the beginning of time, the factors surrounding and influencing it have changed radically with the digitization of society. Because of the long-lasting effects of child molestation and child sexual abuse on individuals - and the ripple effect on their families - we must understand the scope of this issue if we are to have any hope of making the world a safer place for our children.

In the time it took for Ward Cleaver and Fonzie to morph into Homer Simpson and his South Park neighbors, the fiber of humanity changed. Once-safe sidewalks, filled with active children, emptied into avenues where anxious parents now drive their children to school. We've been hit hard with a sudden onslaught of sexual child abuse and we have to deal with it. This isn't television. This isn't a video game. This is real life. We have to protect our little ones. The "Predator-Proof Your Family" series of nine booklets gives practical (hard earned) insight into how to protect children from child sexual abuse or molestation.