Translations from Drawing to Building and Other Essays (Paperback) 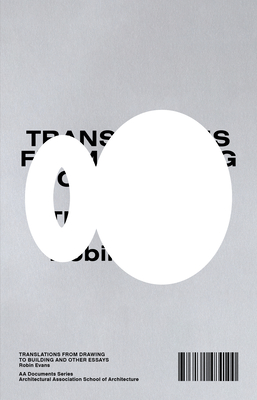 Translations from Drawing to Building and Other Essays (Paperback)


Coming Soon - Available for Pre-Order Now
A re-edition of Robin Evans' classic essay anthology Translations from Drawing to Building and Other Essays, originally published by the Architectural Association (AA) in 1997. Featuring a new introduction, the book is the first in a new series of essay anthologies entitled AA Documents. 'What makes this book so captivating is not just the individual insights, but also the intensity of Evans's vision and the coherence of his approach.' --Joseph Rykwert, Harvard Design Magazine This book brings together eight of the most interesting and significant essays by the unequalled historian Robin Evans, author of The Projective Cast. Written over a period of 20 years from 1970, shortly after his graduation from the Architectural Association (AA), to 1990, the essays cover a wide range of architectural concerns: domestic space, society's involvement with building types, aspects of geometry, modes of projection and drawing as a process for generating ideas. The book includes 'Mies van der Rohe's Paradoxical Symmetries' and other essays first published in AA Files. Evans's writings are supported by a new introduction and an annotated bibliography by Richard Difford. This AA Documents publication is a re-edition of the 1997 essay collection originally published by AA Publications.