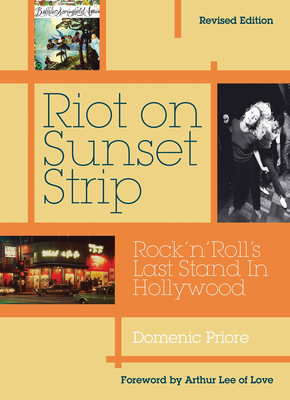 On the Sunset Strip in Los Angeles in 1965 and 1966 an electrifying scene appeared out of nowhere, exploded into creativity, and then, just as suddenly, vanished. So much remarkable music, art, and social revolution came from one place at one time, it's difficult now to grasp how it all happened.

This book tells the story of the astonishing time when rock 'n' roll displaced movies as the centre of action in Hollywood. From the moment The Byrds debuted at Ciro's on March 26th 1965--with Bob Dylan joining them onstage--right up to the demonstrations of November 1966, Sunset Strip nightclubs nurtured and broke The Doors, Love, Buffalo Springfield (featuring Neil Young and Stephen Stills), Frank Zappa's Mothers Of Invention, Captain Beefheart & His Magic Band, The Turtles, The Mamas & The Papas, and many others. The Strip was a hotbed for garage punk bands such as The Standells, The Electric Prunes, and The Leaves. Folk-rock and psychedelia were born there, while it was also a favourite hangout and inspiration for The Beatles, The Rolling Stones, and The Velvet Underground.

Republished to coincide with the 50th anniversary of these incredible times, Riot On Sunset Strip: Rock 'n' Roll's Last Stand In Hollywood captures the excitement of this great artistic awakening, telling how the scene came together and then fell apart at the Monterey Pop festival, the tragic grand finale of the Summer of Love. It serves as a startling evocation of the social and artistic revolution that was the 60s.

Domenic Priore is a writer and television producer specialising in pop culture and music. He is the author of Beatsville (with Martin McIntosh) and Smile: The Story of Brian Wilson's Lost Masterpiece (with forewords by Brian Wilson and Van Dyke Parks), and was the main writer on the AMC documentaries Hollywood Rocks The Movies: The Early Years 1955-1970 (hosted by Ringo Starr) and Hollywood Rocks The Movies: The 1970s (hosted by David Bowie). A native of Los Angeles, Priore has now returned there after living in New York City and San Francisco.

Widely hailed as a genius, Arthur Lee was a character every bit as colorful and unique as his music. In 1966, he was Prince of the Sunset Strip, busy with his pioneering racially-mixed band Love, and accelerating the evolution of California folk-rock by infusing it with jazz and orchestral influences--a process that would climax in a timeless masterpiece, the Love album Forever Changes.