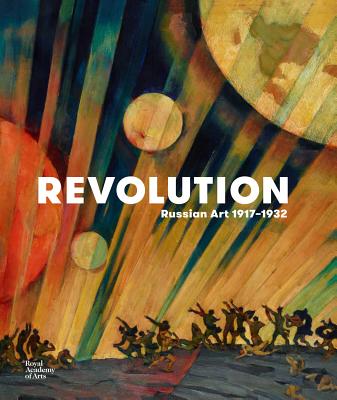 One hundred years after the Russian Revolution, this comprehensive survey explores all aspects of its groundbreaking art

One hundred years after the Russian Revolution, Revolution: Russian Art, 1917-1932 explores one of the most momentous periods in modern world history through its groundbreaking art. The October Revolution of 1917 ended centuries of Tsarist rule and left artists such as Malevich, Tatlin, Popova and Rodchenko urgently debating what form a new "people's art" would take.

Painting and sculpture were redefined by Kandinsky's boldly innovative compositions, Malevich's dynamic abstractions and the Constructivists' attempts to transform art into technical engineering. Photography, architecture, film and graphic design also experienced revolutionary changes. These debates were definitively settled in 1932, when Stalin began to suppress the avant-garde in favor of Socialist Realism--collective in production, public in manifestation and Communist in ideology. Based around a remarkable exhibition shown in Leningrad's State Russian Museum in 1932--which was to be the swansong of avant-garde art in Russia--this volume explores that revolutionary 15-year period between 1917 and 1932 when possibilities seemed limitless and Russian art flourished across every medium. Published to accompany a major exhibition at the Royal Academy of Arts, London (the first to attempt to survey the entire artistic landscape of post-Revolutionary Russia), Revolution explores the painting, sculpture, photography, film, poster art and product design of the years after the Russian Revolution. Including contributions from some of the most prominent scholars in the field (John Milner, Natalia Murray, Nick Murray, Masha Chlenova, Ian Christie, John E. Bowlt, Nicoletta Misler, Zelfira Tregulova, Faina Balakhovskaya, Evgenia Petrova and Christina Lodder), Revolution is a timely and authoritative exploration of both the idealistic aspirations and the harsh realities of the Russian Revolution and its aftermath.