Einstein (Heroes of the Mind) (Hardcover) 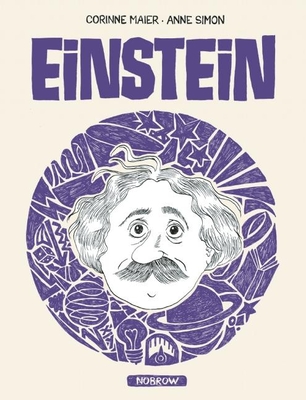 By Corinne Maier, Anne Simon (Illustrator)
Email or call for price
Out of Print - This Title is Unlikely to be Available.

The third in Corinne Maier and Anne Simon's collection of graphic novels exploring the lives of some of the most influential figures in modern history lands its spotlight upon Albert Einstein, the German-born physicist who developed the theory of relativity. He is considered the most influential physicist of the twentieth century.

You've probably heard of him, but you've never seen him like this!

Anne Simon was born in 1980 in France. She studied in the Beaux-Arts in Angoulême, and then in the École Nationale Supérieure des Arts Décoratifs in Paris, one of the most prestigious art schools in France. In 2004, she received the "New Talent" prize at the Angoulême festival, and she released her first comic book Persephone in the Underworld in 2006.

Corinne Maier was born in 1963 in Geneva. As a writer, economist, historian, and psychoanalyst, she has produced around fifteen non-fiction books on subjects like psychoanalysis, society, history, and humor. Her books are bestsellers in her native France and some (such as Hello Laziness) have been translated into several languages.

With verve, the pair manage to educate and entertain.
—Boston Globe

In a deft translation, Maier’s sharp, clever dialogue gives this portrayal a rapid pace, matched by Simon’s energetic and spirited art. Though her figures are drawn in a relatively simple cartoon style, Simon’s adroit panel and page composition illustrate not only Einstein’s life but the wonders of the cosmos. [...] The savvy script and illustration celebrate Einstein’s life and work in a memorably imaginative visual saga.
—Publisher’s Weekly

The best so far of this French team's efforts.
—Booklist

[…] perhaps the most enjoyable pages of this graphic are those that clearly explain his biggest theories: General Relativity, Special Relativity, String Theory. All are broken down into beautifully simple explanations with helpful and entertaining graphics that make this biography a must-read for Einstein fanatics and the newly curious alike.
—BookPage

The cartoon style and conventions are well suited to express what Einstein calls the "universe of my thoughts." The book succeeds as a creative exploration of Einstein’s genius and the factors and forces that may have influenced him.
—School Library Journal

[...] the graphic novel unfolds with elegant simplicity of language and intelligent playfulness that would have delighted Einstein, who was known for his irreverent wit. In addition to the easily digestible format, the substance of the book is decidedly nutritious — Einstein’s most important theories are explained with care and comprehensible clarity.
—Brainpickings

Accessible to all ages, these books provide a deep look into the origins and accomplishments of these historical figures, rendered with a rich, expressive art style that makes these people and their surroundings come to life. Maier’s words and Simon’s visuals blend together beautifully on the page, making for an especially engaging read that never feels like homework.
—The AV Club

The book succeeds as a creative exploration of Einstein’s genius and the factors and forces that may have influenced him. […] An additional purchase for high school or adult graphic novel collections where the history of science is of high interest.
—School Library Journal

A story of the man himself, going from daydreamer to celebrity and ultimately an advocate for peace—after learning, to his horror, that his theory provided the scientific underpinning for the atomic bomb.
—Brigid Alverson

No book can do everything with such a life. But this is a job well done.
—The Comics Journal

Humorous and a great overview of the life of one of the greatest minds of the 20th century, Einstein is a graphic jaunt through both the scientist's world and work. A good introduction to his theories and ideas, this will be an enjoyable read for any readers of memoir comics or for older children.
—Left Bank Books