Conform to Deform: The Weird & Wonderful World of Some Bizzare (Paperback) 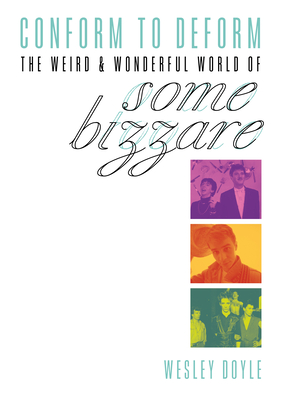 The rise and fall of Some Bizzare--the label that introduced the world to Soft Cell, Depeche Mode, and The The--is the great untold story of alternative music.

Along with Factory, Mute, and Creation, Some Bizzare was the vanguard of outsider music in the 1980s. The label's debut release reads like a who's who of electronic music, featuring early tracks from Soft Cell, Depeche Mode, Blancmange, and The The, while over the next decade its roster would include artists such as Marc Almond, Cabaret Voltaire, Einst rzende Neubauten, Foetus, Swans, Coil, and Psychic TV.

For a time, Some Bizzare was the most exciting independent record label in the world, but the music is only half of the story. Self-styled label boss Stevo Pearce's unconventional dealings with the industry are legendary. Sometimes they were playful (sending teddy bears to meetings in his place), other times less so (he and Marc Almond destroyed offices at Phonogram and terrorised staff). Despite this, he was a force to be reckoned with. His preternatural ability to spot talent meant his label was responsible for releasing some of the decade's most forward-thinking, transgressive, and influential music.

The Some Bizzare story spans the globe: from ecstasy parties in early 80s New York to video shoots in the Peruvian jungle, from events in disused tube stations to seedy sex shows in Soho. There were million-selling singles, run-ins with the Vice Squad, destruction at the ICA, death threats, meltdowns, and, of course, sex dwarves. For a time, Stevo had the music industry in the palm of his hands, only for it all to slip through his fingers. But he and Some Bizzare left a legacy of incredible music that still has an influence and impact today.