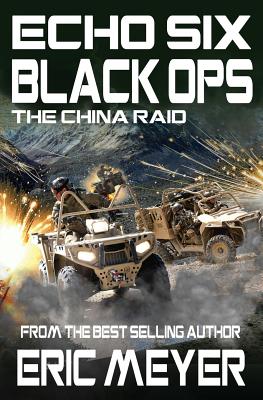 This is book number 8 in the Echo Six: Black Ops series.

Chinese Islamists are poised to strike at the heart of Asia, as they unleash a plan to create a state in the heart of China. NATO has uncovered a plan to blackmail Beijing with the threat of a genocidal attack. Uighur terrorists have created a weapon of mass destruction, and threaten to unleash it on the capital city of the most populous nation on earth if their demands are not met. Yet the threat is not just confined to China. The weapon was built with parts sourced in the USA and Europe, a factor NATO fears could ignite a war between East and West.

Echo Six, the elite NATO Special Forces unit, is sent in to recover the device. Right from the start, the odds are stacked against them when they face a horde of well-armed fanatics. The situation worsens when the People's Liberation Army of China gets wind of the foreign fighters on their territory. The battle against the Islamists becomes a race to avoid the clutches of the vast army of the communist mainland. An army intent on protecting its homeland at any cost.

Fighting for every inch of ground, battling overwhelming odds just to survive, the Echo Six operators press on to complete their mission. Failure to neutralize the weapon will result in the deaths of tens of thousands, perhaps millions of innocents. This is a thrilling and bloody story of NATO Special Forces, operating behind enemy lines. Men trained to go to any lengths to complete their mission, and to die for it if necessary. Echo Six Black Ops: The China Raid is by the bestselling author of many other Spec Ops stories. These include the popular SEAL Team Bravo titles, the Raider series, as well as the Echo Six and Devil's Guard series.