Christianity As Mystical Fact; and The Mysteries of Antiquity: (Aziloth Books) (Paperback) 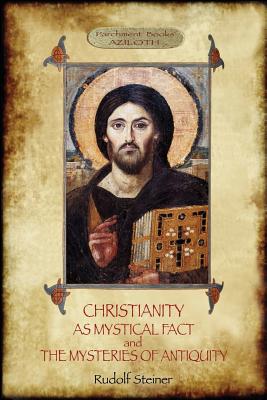 This work is a powerful argument for Christianity as a religion of mystical initiation and the only religion in which the eternal wisdom, the Logos, was made flesh - in Christ. Moreover, unlike the adepts of old, Jesus was "...the initiator of the whole of humanity, and humanity was to be his own community of Mystics."

From an early age Austrian-born Rudolf Steiner (1861-1925), a respected scholar, felt the reality of the spiritual world and devoted much of his life to proving this assumption by "...introspective observation following the methods of Natural Science."

In Christianity as Mystical Fact, Dr. Steiner looks at mysticism within Christianity and also its source in pre-Christian times - the priest sages of the Egyptian mystical schools and Greece's famous initiates such as Solon, Aristides and Plato. He argues that the spiritual claims of Christianity cannot be proved by a literal historical approach to the bible. Rather, it is only through mystical enlightenment or "gnosis" that Christianity's spiritual message can be truly known and this experience, according to Steiner, is no less an empirical fact than those of orthodox science. He looks at the New Testament with the eyes of a mystic and finds a whole other layer of meaning there - for example, in the Lazarus miracle, which he describes as a spiritual initiation, "... the point of transition from lower to higher knowledge."