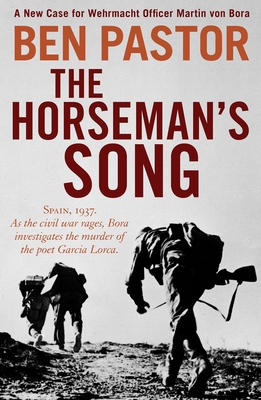 Spain, summer 1937. The civil war between Spanish nationalists and republicans rages. On the bloody sierras of Aragon, among Generalissimo Franco's volunteers is Martin Bora, the twenty-something German officer and detective whose future adventures will be told in Lumen, Liar Moon, The Road to Ithaca and others in the Bora series.

Presently a lieutenant in the Spanish Foreign Legion, Bora lives the tragedy around him as an intoxicating epic, between idealism and youthful recklessness.

The first doubts, however, rise in Bora's mind when he happens on the body of Federico Garcia Lorca, a brilliant poet, progressive and homosexual. Who murdered him? Why? The official version does not convince Bora, who begins a perilous investigation. His inquiry paradoxically proceeds alongside that which is being carried out by an "enemy" Philip Walton, an American member of the International Brigades. Soon enough the German and the New Englander will join forces, and their cooperation will not only culminate in a thrilling chase after a murderer, but also in a very human, existential face-to-face between two adversaries forever changed by their crime-solving encounter...

Ben Pastor, born in Italy, lived for thirty years in the United States, working as a university professor in Vermont and has since returned to her native country. She is the author of other novels including The Water Thief and The Fire Waker (set in Roman times and published to high acclaim in the US by St. Martin's Press), and is considered one of the most talented writers in the field of historical fiction. In 2008 she won the prestigious Premio Zaragoza for best historical fiction. She writes in English.