The National: Chronicles of a Dun Laoghaire Yacht Club (Paperback) 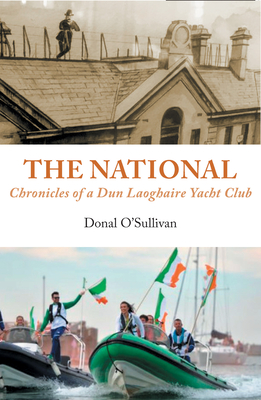 This entertaining work by Donal O'Sullivan tells how the National Yacht Club developed, from its beginnings as a rowing club, comfortably set down in the northeast corner of Dun Laoghaire Harbour, how it nearly went under on a couple of occasions, was threatened with forced migration to a less salubrious part of the Dun Laoghaire Harbour and ultimately grew into one of the finest yacht clubs in Dublin.

Donal has called the work chronicles because he is uneasy about calling it a history. A yacht club, a building, is not something you can easily put a history on, not least this one which lost over 100 years of its records in two disastrous conflagrations.

So what is presented here is a narrative of the club's evolution not so much by way of its physical or organizational structure but by particular reference to some of the people who featured in the club's story, or who gave the club a perceptible quality which might be thought characteristic of the National Yacht Club. The Greek word ethos would be too grand to describe it. Rather it's a certain singularity, a disinclination to be too predictable or over respectful to convention or the accepted way of doing things.

This is not to say that dramatic events did not occur at the NYC, not the least of which was the homecoming party for Annalise Murphy after she won a Silver Medal in the 2016 Summer Olympics.

As the Commodore, Martin McCarthy notes, "As temporary custodians of the club, this history reminds us of how the many previous Commodores, Flag Officers and members adapted their policies and operations to meet the ever-changing requirements of Dublin and Ireland's sailing fraternity... We owe a great debt of gratitude to Donal O'Sullivan for his... engaging and entertaining writing style and] breathtaking knowledge of who, what, where and when, which captures many of the milestones on the lifetime of the club in the last 150 years.