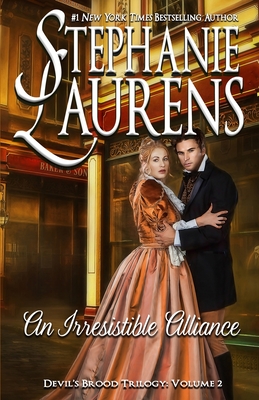 A duke's second son with no responsibilities and a lady starved of the excitement her soul craves join forces to unravel a deadly, potentially catastrophic threat to the realm - that only continues to grow.

With his older brother's betrothal announced, Lord Michael Cynster is freed from the pressure of familial expectations. However, the allure of his previous hedonistic pursuits has paled. Then he learns of the mission his brother, Sebastian, and Lady Antonia Rawlings have been assisting with and volunteers to assist by hunting down the hoard of gunpowder now secreted somewhere in London. Michael sets out to trace the carters who transported the gunpowder from Kent to London. His quest leads him to the Hendon Shipping Company, where he discovers his sole source of information is the only daughter of Jack and Kit Hendon, Miss Cleome Hendon, who although a fetchingly attractive lady, firmly holds the reins of the office in her small hands.

Cleo has fought to achieve her position in the company. Initially, managing the office was a challenge, but she now conquers all in just a few hours a week. With her three brothers all adventuring in America, she's been driven to the realization that she craves adventure, too. When Michael Cynster walks in and asks about carters, Cleo's instincts leap. She wrings from him the full tale of his mission-and offers him a bargain. She will lead him to the carters he seeks if he agrees to include her as an equal partner in the mission.

Horrified, Michael attempts to resist, but ultimately finds himself agreeing-a sequence of events he quickly learns is common around Cleo. Then she delivers on her part of the bargain, and he finds there are benefits to allowing her to continue to investigate beside him-not least being that if she's there, then he knows she's safe.

But the further they go in tracing the gunpowder, the more deaths they uncover. And when they finally locate the barrels, they find themselves tangled in a fight to the death-one that forces them to face what has grown between them, to seize and defend what they both see as their path to the greatest adventure of all. A shared life. A shared future. A shared love.

Second volume in a trilogy. A historical romance with gothic overtones layered over a continuing intrigue. A full length novel of 101,000 words.

Praise for the works of Stephanie Laurens

"Stephanie Laurens plays into readers' fantasies like a master and claims their hearts time and again." Romantic Times Magazine