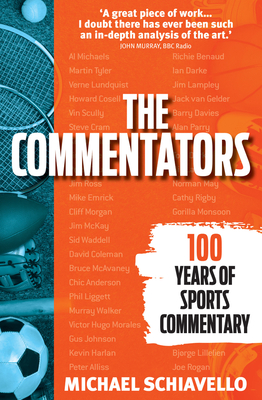 Award-winning commentator Michael Schiavello examines the greatest sports commentators in history, the best calls ever heard, and offers stories from his own journey through the sports broadcasting world.

A powerful story unfolding during a sports event can inspire us about a sport we’ve never watched, an athlete we haven’t heard of, or a country we’ve never visited or even located on a map. Stories engross an audience and engage them on an emotional level. Once a commentator captures an audience’s emotions, they’re putty in his hands. The power of sports lies within those individuals and the ability of the commentator to tell those stories.

"The ultimate book for all sports fans!" —Pat Miletich, UFC Hall of Famer, Commentator for Showtime and ESPN

"In particular, his writing of Scully's call of the perfect game pitched by Sandy Koufax in 1965 was a masterpiece. It would be hard to do justice in the printed word to Scully's wonderful call of that game, but the writing about Scully's call in the 9th inning is a must-read passage. . . . A book that any sports fan should read." —Sports Book Guy