The History of Montréal: The Story of Great North American City (Paperback) 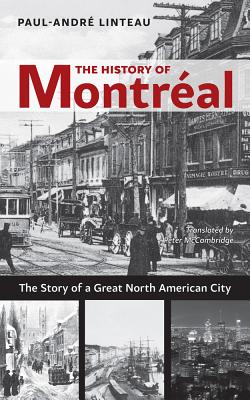 The History of Montréal: The Story of Great North American City (Paperback)

This book tells the fascinating story of Montreal, Canada, from prehistoric time through the 21st century. From the Iroquoian community of Hochelaga to the bustling economic metropolis that Montreal has become, this account describes the social, economic, political, and cultural forces and trends that have driven the city’s development, shedding light on the city's French, British, and American influences. Outlining Montreal's diverse ethnic and cultural origins and its strategic geographical position, this lively account shows how a small missionary colony founded in 1642 developed into a leading economic city and cultural center, the thriving cosmopolitan hub of French-speaking North America.

Paul-André Linteau is a professor of history at the Université du Québec à Montréal and the head of the History Collection of Les Éditions du Boréal, one of Quebec's leading French-language publishing houses. He is the author of many books on the history of Quebec and Canada and the recipient of the International Canadian Studies Award of Excellence and the Prix Léon-Gérin. He lives in Montreal. Peter McCambridge is an award-winning professional translator, whose translations include The Adventures of Radisson 1, Hell Never Burns, and The Orphanage. He is the recipient of the 2012 prestigious John Dryden Translation Prize awarded by the British Comparative Literature Association. He lives in Quebec City.