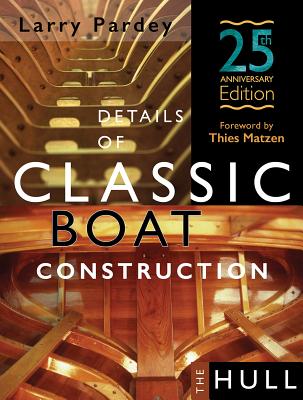 This impressive book shows the process of constructing a boat hull with extensive photographs and drawings and includes ample time-saving procedures. Larry Pardey is accepted as one of the master craftsman of the wooden-boat building world. He and his wife, Lin, have built two, strong, handsome boats an sailed twice around the world in them. This book will help you to save money, time, and energy while creating the boat of your dreams. This book will also guide you with the right tools and equipment, planning and detailing as well as how to create and make your own tools. Guides to repairing and maintaining your boat are included as well. A world of useful information is contained in just these 448 pages.

This 25th anniversary edition has a new iforward by Theis Mattisen, renewned boatbuilder, sailor, adventurer and writer who feels this book will encourage even the least skilled of boatbuilders.

Larry Pardey spent his teenage years rebuilding several boats ranging from eight to twenty feet in length. As he sold each one, he used his "sweat equity" profits to finance his next project. His largest from-the-keel-up projects have been the two boats he built with his wife Lin: Seraffyn the five-ton cutter which took them on an eleven-year, east-about circumnavigation, and Taleisin the boat shown in this book, which took them west-about over the past 30 years. As they cruised, Larry put his skills to work earning the majority of his income by repairing and restoring classic boats in fifteen different countries, including two that he and Lin then raced successfully in New Zealand. Many of the ideas he shares in this book where learned from builders he met in the course of his travels. As Peter Milne, editor of Classic Boat magazine commented, "Larry's prime interest might be the building of wooden craft, but he is one of those rare creatures, a builder who has covered a tremendous number of sea miles - more than 200,000- in yachts of his own building as well as other people's. This has given Larry firsthand information about which boat-building techniques work, which don't, out there in the big test-tank, the ocean. With his well-rounded background, larry has developed a reputation as one of the master craftsmen of the wooden boatbuilding world." For over 45 years, Lin has worked alongside Larry, doing his purchasing and finish work. She has written extensively about their voyages and worked as researcher and editor on this book. Together Lin and Larry have written ten other books and produced five videos on various sailing subjects. They are currently residing at their homebase in New Zealand where they have a small boat repair facility.