Story of the World, Vol. 1: History for the Classical Child: Ancient Times (Paperback) 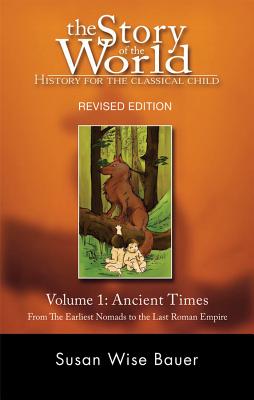 Story of the World, Vol. 1: History for the Classical Child: Ancient Times (Paperback)

This first book in the four-volume narrative history series for elementary students will transform your study of history. The Story of the World has won awards from numerous homeschooling magazines and readers' polls—over 150,000 copies of the series in print!

What terrible secret was buried in Shi Huangdi's tomb? Did nomads like lizard stew? What happened to Anansi the Spider in the Village of the Plantains? And how did a six-year-old become the last emperor of Rome?

Told in a straightforward, engaging style that has become Susan Wise Bauer's trademark, The Story of the World series covers the sweep of human history from ancient times until the present. Africa, China, Europe, the Americas—find out what happened all around the world in long-ago times. This first revised volume begins with the earliest nomads and ends with the last Roman emperor. Newly revised and updated, The Story of the World, Volume 1 includes maps, a new timeline, more illustrations, and additional parental aids. This read-aloud series is designed for parents to share with elementary-school children. Enjoy it together and introduce your child to the marvelous story of the world's civilizations.

Each Story of the World volume provides a full year of history study when combined with the Activity Book, Audiobook, and Tests—each available separately to accompany each volume of The Story of the World Text Book. Volume 1 Grade Recommendation: Grades 1-5.

Susan Wise Bauer is a writer, educator, and historian. Her previous books include the Writing With Ease, Writing With Skill, and Story of the World series from Well-Trained Mind Press, as well as The Well-Trained Mind: A Guide to Classical Education at Home, The Well-Educated Mind: A Guide to the Classical Education You Never Had, Rethinking School, The Story of Western Science: From the Writings of Aristotle to the Big Bang Theory, and the History of the World series, all from W. W. W. Norton. She has a Ph.D. in American Studies from the College of William & Mary in Virginia, as well as an M.A. in seventeenth-century literature and a Master of Divinity in Ancient Near Eastern Languages and Literature. For fifteen years, she taught literature and composition at the College of William and Mary.
This may well be the best multi-age read aloud narrative of world history yet to have been written.
— Homeschooling in Japan