Script and Scribble: The Rise and Fall of Handwriting (Hardcover) 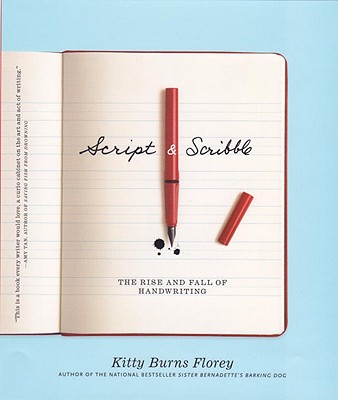 By Kitty Burns Florey
Email or call for price
Out of Print - This Title is Unlikely to be Available.

“Tracing the story from the earliest cave scribblings to the Palmer Method to today's text-message-composed novels, this is a great read for anyone who has ever agonized over their signature, wondered what the slant on their 'l' means, or deplored the state of penmanship in today's typing world.”
— Jenn Northington, The King's English, Salt Lake City, UT

Steeped in the Palmer Method of Handwriting she learned in Catholic school, Kitty Burns Florey is a self-confessed penmanship nut who loves the act of taking pen to paper. So when she discovered that schools today forego handwriting drills in favor of teaching something called "keyboarding," it gave her pause: There is a widespread belief that, in a digital world, forming letters on paper with a pen is pointless and obsolete, she says, and anyone who thinks otherwise is right up there with folks who still have fallout shelters in their backyards.
Florey tackles the importance of writing by hand and its place in our increasingly electronic society in this fascinating exploration of the history of handwriting. Weaving together the evolution of writing implements and scripts, pen-collecting societies, the golden age of American penmanship, the growth in popularity of handwriting analysis, and the many aficionados who still prefer scribbling on paper to tapping on keys, she asks the question: Is writing by hand really no longer necessary in today's busy world?

KITTY BURNS FLOREY is the author of "Sister Bernadette's Barking Dog: The Quirky History and Lost Art of Diagramming Sentences." She has also written nine novels most recently, "The Writing Master" and many short stories and essays. She lives in Amherst, Massachusetts."

"This is a book every writer would love, a curio cabinet on the art and act of writing."
- Amy Tan, author of Saving Fish from Drowning

"What in God's name has happened to penmanship? It's easy to blame the computer, but, as Kitty Burns Florey demonstrates in her thoughtful, witty, and sensible book, the story goes far deeper than that. It touches on the way we think, the way we write, and the way we lead our lives. Read Script and Scribble and be enlightened."
- Ben Yagoda, author of If You Catch an Adjective, Kill It!

"[A] pithy account of the history of handwriting...Florey makes a solid case for handwriting as a social indicator, and her affection for its art is thoughtful and aesthetically informed."
- Albert Mobilio, Bookforum

"...a witty and readable (and fetchingly illustrated and glossed) excursion through the history of handwriting..."
- Cullen Murphy, The Wall Street Journal

"[A] charming, illustrated eulogy to a craft that's fast losing its place in the modern world."
- Financial Times

"Florey's argument is nostalgic yet pragmatic. 'It seems wrong,' she says, 'when something beautiful, useful, and historically important vanishes.' Charmingly composed and handsomely presented, Script and Scribble just might provoke a handwriting revival."
- Boston Globe

"Florey lovingly traces the history of handwriting, from its ancient birth to its imminent demise."
- Sam Anderson, New York Magazine