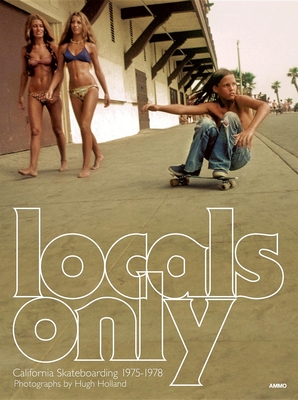 One afternoon in 1975, a young photographer named Hugh Holland drove up Laurel Canyon Boulevard in Los Angeles and encountered skateboarders carving up the drainage ditches along the side of the canyon. Immediately transfixed by their grace and athleticism, he knew he had found an amazing subject. Although not a skateboarder himself, for the next three years Holland never tired of documenting skateboarders surfing the streets of Los Angeles, parts of the San Fernando Valley, Venice Beach, and as far away as San Francisco and Baja California, Mexico. During the mid-1970s, Southern California was experiencing a serious drought, leaving an abundance of empty swimming pools available for trespassing skateboarders to practice their tricks. From these suburban backyard haunts to the asphalt streets that connected them, this was the place that created the legendary Dogtown and Z-Boys skateboarders. With their requisite bleached blonde hair, tanned bodies, tube socks and Vans, these young outsiders are masterfully captured against a sometimes harsh but always sunny Southern California landscape in LOCALS ONLY. LOCALS ONLY features more than 120 beautiful color images plus a Q+A format interview with the artist.

Hugh Holland began photographing skateboarders in southern California in 1975. His series of skateboard photographs was first shown at M+B Gallery in Los Angeles in 2006. Following the success of the show, his work has been shown in Paris and New York City, and fashion trendsetters such as American Apparel have used Holland's skateboarding images in their publicity campaigns. Holland resides in Los Angeles.

"'Locals Only' is a celebration of youth. Muscles, wiry bodies, long, tangled hair. A kid might have been in one of the most awkward stages of adolescence, but when he was sailing around an empty pool, Holland reminds us, he was something else entirely. He was perfection." —Los Angeles Times

"[Hugh] Holland immortalized the brash riders with his camera. Nearly four decades later, the fruits of his work are collected in 'Locals Only,' a book infused with nostalgia for the birth of a sport and the exuberance of a youth culture. ... The book may be a snapshot of an era long passed, but the photos of young skaters in long haircuts and Vans feel as timely as ever." —ESPN Magazine

"Skateboards, sweatbands, streetwear and other relics of the '70s are perfectly preserved in Holland's action shots of rail-riding teens." —Time Out New York