Graduating Present: The Vietnam War & The Class of '66: (Paperback) 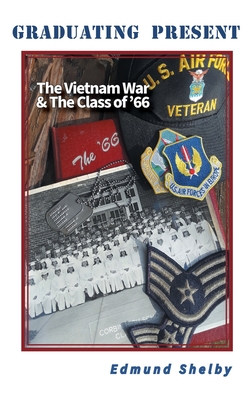 This is the story of a typical public high school in a typical small American town during the Vietnam War. The boys who graduated from that school in 1966 faced some difficult challenges-the most serious being whether to join the American military, be drafted, or seek some sort of deferment.

The girls also had to deal with the war. Some dated guys who faced the uncertain future, some married them, and all were aware, because of nightly news reports, that it was an unsettled time.

Some of the boys embraced the opportunity to join the service and go to Vietnam. Others volunteered just to get the uncertainty over with. Yet others looked for ways to avoid the military completely.

Those choices are at the center of this story.

Air Force veteran and journalist EDMUND SHELBY has crafted this well-researched memoir based on his own recollections and lived experiences combined with insightful interviews with his peers from the iconic Class of '66. Shelby's enlightening study is wrapped in cultural and political contexts of those years when the war in Vietnam and southeast Asia was steadily escalating to its very height.

In GRADUATING PRESENT, members of the Class of '66 recall their shared anxieties brought on by facing a military draft, struggling to fathom an unclear mission and dealing with troubles on the home front.

Their stories are compelling; their regrets are palpable.

Shelby's incisive analysis moves readers effortlessly through the lifespan of a generation - from a post-WWII childhood to feelings of being unwillingly ensnared in and threatened by the global politics of war.