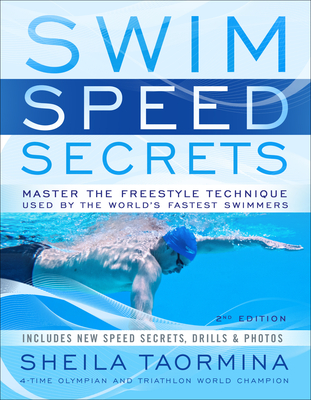 By Sheila Taormina
Email or call for price
Out of Print - This Title is Unlikely to be Available.

In this new edition of the best-selling Swim Speed Secrets, the 4-time Olympian, gold medalist, and triathlon world champion reveals the swim technique used by the world's fastest swimmers.Taormina's guidance is clear and easily understood so any swimmer or triathlete can learn and master the fastest way to swim.

Over the course of four Olympic Games and throughout her career as a world champion triathlete, Taormina refined her winning technique through a close study of the sport, examining the world's best swimmers using underwater photographs, video analysis, and historical archives. From Johnny Weissmuller to Michael Phelps, Taormina found that the world's fastest swimmers share two common elements: high stroke rate and a high-elbow underwater pull.

Though she stands just 5' 2" tall, Taormina honed her swimming technique to victory and shares her Swim Speed method in Swim Speed Secrets. Many swimmers and triathletes neglect the underwater pull, distracted by low stroke count or perfecting less critical details like body position, streamlining, and roll. Swim Speed Secrets,2nd Ed. focuses on the most crucial element of swimming--producing power--to help swimmers and triathletes overhaul their swim stroke and find the speed that's been eluding them.

With a commonsense approach that comes from decades of intense practice and hands-on coaching experience, Taormina shows swimmers how to transition to faster swimming.

- Crystal-clear photographs and descriptions of the underwater freestyle stroke.

- NEW A simplified guide to stroke rate and "gears" to guide every swimming workout.

- New drills to cultivate a sensitive, faster, and more effective feel for the water.

Sheila Taormina is a 4-time Olympian, gold medalist, triathlon world champion, and swimming coach. Her Swim Speed Series is the best-selling guide to swimming technique for swimmers and triathletes.Taormina is one of a handful of athletes who have competed in four Olympic games and the only woman in the world to have competed in three distinctly different sports--swimming, triathlon, and modern pentathlon. At the unswimmerlike height of just 5' 2, Taormina refined her exceptional freestyle swim technique to win a gold medal in the 1996 Olympics and the 2004 ITU triathlon world championship.For 20 years, Taormina has coached elite and age-group swimmers and triathletes to develop the strong underwater pull that propelled her to such athletic success in her racing career. Taormina conducts dozens of swim clinics around the world each year.Sheila Taormina is author of the Swim Speed Series, which includes the sport's top-selling guides: Swim Speed Secrets, Swim Speed Workouts, and Swim Speed Strokes.