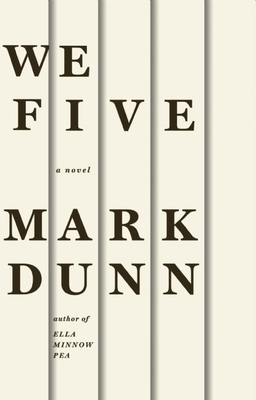 We Five tells the story of five young female friends and co-workers through the voices of five different authors, the story unfolding against five distinct historic backdrops. The driving conceit is that an anonymously authored manuscript from the mid-1860s (perhaps the work of Dickens contemporary Elizabeth Gaskell) was discovered and later published. Over the succeeding decades four other authors choose to retell this story in their own time and in their own way. The last author has now gone a step further: she has assembled all five versions into a literary pastiche which cycles chapter-by-chapter through the different versions as the central narrative progresses. The result is a novel about five young women pursued by five young men of predatory purpose, which takes place alternatively in a small mill town outside of Manchester, England in 1859; in San Francisco on the eve of the 1906 earthquake and fire; in Sinclair Lewis's fictional Zenith, Winnemac in 1923; in London during the Blitz of autumn, 1940; and in a small town in northern Mississippi in 1997. In the first book "We Five" are seamstresses; in the next they are department store sales clerks; in the next, they sing in the choir of a popular female evangelist; in the next, they work in an ordinance factory outside of London; and in the final version, they are cocktail waitresses in a Mississippi River casino. The book's climax is a dramatic collision of all five incarnations of the story: an incident of mass hysteria arising from a solar storm in 1859, the 1906 San Francisco quake, a fire in the evangelist's newly built "temple" in 1923, the 1940 Balham Underground station bombing and flooding, and a tornado in rural 1997 Mississippi.

Mark Dunn is the author of five previous novels and more than thirty full-length plays. Currently the playwright-in-residence with the New Jersey Repertory Company and the Community Theatre League in Williamsport, PA, he lives in Santa Fe, NM.