Africobra: Messages to the People (Hardcover) 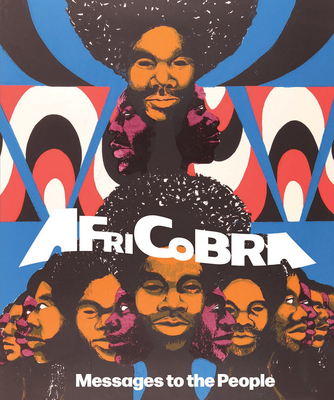 AfriCOBRA (African Commune of Bad Relevant Artists) was founded on the South Side of Chicago in 1968 by a group of five young Black artists. Today, it is one of the oldest continuously active American art collectives. The pronunciation--Af-FREE-co-bruh--emphasizes the second syllable, signaling the group's central principle grounded in Black liberation: creative expression reflecting the Black experience and Black influences.
AfriCOBRA's founding artists--Jeff Donaldson, Jae Jarrell, Wadsworth Jarrell, Barbara Jones-Hogu and Gerald Williams--differed in disciplines and artistic vocabularies but were brought together by the common aspiration to create work that speaks directly to Black people utilizing an identifiably Black aesthetic. This publication celebrates the fifty-year anniversary of AfriCOBRA's founding and marks the collective's powerful relevance today. AfriCOBRA: Messages to the People documents two exhibitions curated by Jeffreen M. Hayes, PhD: one at the Museum of Contemporary Art, North Miami, and another as an official collateral event of the 58th Venice Biennale. It features more than 80 works by the original members as well as those by Sherman Beck, Napoleon Jones-Henderson, Omar Lama, Carolyn Mims Lawrence and Nelson Stevens.
More than a historical overview of AfriCOBRA, this book is a response to the artists' continuing contributions and influence, connecting their works to the contemporary moment through essays, archival photographs and ephemera, exhibition views, and contemporary photographs that celebrate the impact of this revolutionary art collective. As their name states, the artists and artworks of AfriCOBRA were as relevant in 1968 as they are today in the continued struggle for Black liberation.