The Factory Girls: A Kaleidoscopic Account of the Triangle Shirtwaist Factory Fire (Hardcover) 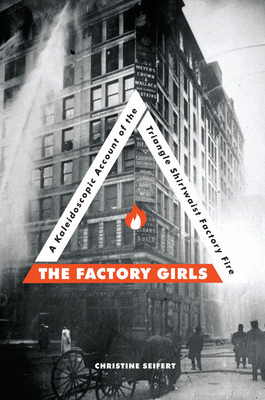 The Factory Girls: A Kaleidoscopic Account of the Triangle Shirtwaist Factory Fire (Hardcover)


Email or call for price.
The twentieth century ushered in a new world filled with a dazzling array of consumer goods. For the first time in American history, fashion could be mass produced. Even the poorest immigrant girls could afford a blouse or two. But these same immigrant teens toiled away in factories in appalling working conditions. Their hard work and sacrifice lined the pockets of greedy factory owners who were almost exclusively white men. The tragic Triangle Waist Factory fire in 1911 resulted in the deaths of over a hundred young people, mostly immigrant girls, who were locked in the factory.

That fire signaled a turning point in American history. This book will examine the events leading up to the fire, including a close look at how fashion and the desire for consumer goods—driven in part by the excess of the Gilded Age—created an unsustainable culture of greed. Told from the perspective of six young women who lived the story, this book will remind us why what we buy and how we vote really matter.
Christine Seifert is a native North Dakotan, a professor at Westminster College in Salt Lake City, Utah, and a Young Adult writer. She is the author of the YA novel The Predicteds, as well as the nonfiction books Whoppers: History's Most Outrageous Lies and Liars and The Endless Wait: Virginity in Young Adult Literature (2015). She writes for BitchMagazine and other publications, and has presented at academic conferences on such diverse topics as as Writing, Rhetoric, Twilight,and Jersey Shore.