Beyond Biocentrism: Rethinking Time, Space, Consciousness, and the Illusion of Death (Hardcover) 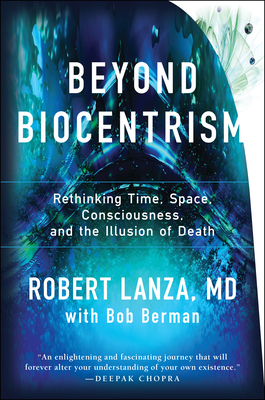 Biocentrism shocked the world with a radical rethinking of the nature of reality.

But that was just the beginning.

In Beyond Biocentrism, acclaimed biologist Robert Lanza, one of TIME Magazine's "100 Most Influential People in 2014," and leading astronomer Bob Berman, take the reader on an intellectual thrill-ride as they re-examine everything we thought we knew about life, death, the universe, and the nature of reality itself.

The first step is acknowledging that our existing model of reality is looking increasingly creaky in the face of recent scientific discoveries. Science tells us with some precision that the universe is 26.8 percent dark matter, 68.3 percent dark energy, and only 4.9 percent ordinary matter, but must confess that it doesn't really know what dark matter is and knows even less about dark energy. Science is increasingly pointing toward an infinite universe but has no ability to explain what that really means. Concepts such as time, space, and even causality are increasingly being demonstrated as meaningless.

All of science is based on information passing through our consciousness but science hasn't the foggiest idea what consciousness is, and it can't explain the linkage between subatomic states and observation by conscious observers. Science describes life as a random occurrence in a dead universe but has no real understanding of how life began or why the universe appears to be exquisitely designed for the emergence of life.

The biocentrism theory isn't a rejection of science. Quite the opposite. Biocentrism challenges us to fully accept the implications of the latest scientific findings in fields ranging from plant biology and cosmology to quantum entanglement and consciousness.

By listening to what the science is telling us, it becomes increasingly clear that life and consciousness are fundamental to any true understanding of the universe. This forces a fundamental rethinking of everything we thought we knew about life, death, and our place in the universe.

Robert Lanza, MD is one of the most respected scientists in the world—a U.S. News & World Report cover story called him a "genius" and "renegade thinker," even likening him to Einstein. Lanza is head of Astellas Global Regenerative Medicine, Ocata Chief Scientific Officer, and adjunct professor at Wake Forest University School of Medicine. He was recognized by Time magazine in 2014 on its list of the "100 Most Influential People in the World." Prospect magazine named him one of the Top 50 "World Thinkers" in 2015. He is credited with several hundred publications and inventions, and over thirty scientific books, including the definitive references in the field of stem cells and regenerative medicine. A former Fulbright Scholar, he studied with polio pioneer Jonas Salk and Nobel Laureates Gerald Edelman and Rodney Porter. He also worked closely (and coauthored a series of papers) with noted Harvard psychologist B. F. Skinner and heart transplant pioneer Christiaan Barnard. Dr. Lanza received his undergraduate and medical degrees from the University of Pennsylvania, where he was both a University Scholar and Benjamin Franklin Scholar. Lanza was part of the team that cloned the world's first human embryo, as well as the first to successfully generate stem cells from adults using somatic-cell nuclear transfer (therapeutic cloning). In 2001 he was also the first to clone an endangered species, and recently published the first-ever report of pluripotent stem cell use in humans.

Bob Berman is the longtime science editor of the Old Farmer's Almanac, and contributing editor of Astronomy magazine, formerly with Discover from 1989 to 2006. He produces and narrates the weekly Strange Universe segment on WAMC Northeast Public Radio, heard in eight states, and has been a guest on such TV shows as Late Night with David Letterman. He taught physics and astronomy at New York's Marymount College in the 1990s, and is the author of eight popular books. His newest is Zoom: How Everything Moves (2014, Little Brown).

"Lanza and Berman employ cutting edge science to rediscover ancient truths about life and death and reconceptualize our very notions of reality and consciousness. Beyond Biocentrism is an enlightening and fascinating journey that will forever alter your understanding of your own existence."
—Deepak Chopra

"This intriguing and provocative book will challenge some of what you know and push you into rethinking your view of science—all the while entertaining you with a fast-paced, exhilarating narrative journey."
—David J. Eicher, editor in chief, Astronomy Magazine

"Beyond Biocentrism is a joyride through the history of science and cutting-edge physics, all with a very serious purpose: to find the long-overlooked connection between the conscious self and the universe around us."
—Corey S. Powell, former editor-in-chief, Discover magazine

"[Beyond Biocentrism] offers a neurobiological point of view to help answer questions about the world around us. Lanza and Berman make the journey towards a better understanding of the role of consciousness and perception. . . . A fun read."
—Kwang-Soo Kim, professor of Psychiatry and Neuroscience, Harvard Medical School, and director, Molecular Neurobiology Laboratory, McLean Hospital

"Lanza and Berman's latest statement of their theory of ‘biocentrism' changes the way we think about age-old religious questions such as the origin of the universe and human immortality. Based on cutting edge work in physics and biology and explained with exceptional clarity, Beyond Biocentrism is a must-read for anyone interested in science and religion."
—Ronald M. Green, professor emeritus for the study of ethics and human values, and former chairman of the Department of Religion at Dartmouth College

"Will machines ever achieve consciousness? Are plants aware? Is death an illusion? These are some of the big questions tackled in Beyond Biocentrism, which serves up a new, biology-based theory of everything that is as delightful to read as it is fascinating. Tremendously clear and lovely writing—a huge achievement."
—Pamela Weintraub, psychology & health editor for Aeon Magazine, former Executive Editor of Discover Magazine and former editor in chief of OMNI Magazine

"An extraordinary mind. . . . Having interviewed some of the most brilliant minds in the scientific world, I found Dr. Robert Lanza's insights into the nature of consciousness original and exciting. His theory of biocentrism is consistent with the most ancient traditions of the world which say that consciousness conceives, governs, and becomes a physical world. It is the ground of our Being in which both subjective and objective reality come into existence."
—Deepak Chopra

"This is a brave new book. Instead of placing life as an accidental byproduct, the authors place life at the apex of universal existence and purpose. It is a very thrilling and disturbing read. While the proposals made in Biocentrism seem radical and counter-intuitive at first, a bit of reflection will soon make the images clearer and place us on the pathway to a better and more commonsensical mindset."
—Michael Gooch, author of Wingtips with Spurs

"Both interesting and worth the effort of reading it . . . From the way [Lanza] chooses to present his arguments, it's clear he has a solid grasp of esoteric disciplines . . . His style is conversational . . . And his sense of wonder . . . is as infectious as it is delightful."
—Midwest Book Review