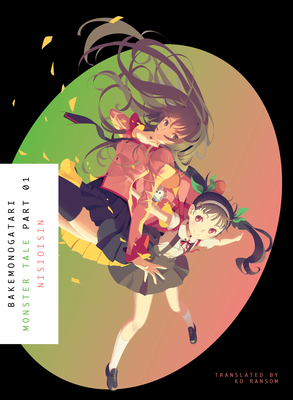 This is book number 2 in the Monogatari series.

There’s a girl at their school who is always ill. She routinely arrives late, leaves early, or doesn’t show up at all, and skips gym as a matter of course. She’s pretty, and the boys take to whispering that she’s a cloistered princess. As the self-described worst loser in her class soon finds out, they just don’t know what a monster she is.

So begins a tale of mysterious maladies that are supernatural in origin yet deeply revealing of the human psyche, a set of case files as given to unexpected feeling as it is to irreverent humor. So begins the legendary novel that kicked off the MONOGATARI series, whose anime adaptations have enjoyed international popularity and critical acclaim.

This first of three parts introduces Senjogahara and Hachikuji, and fans of the blockbuster prequel KIZUMONOGATARI will be delighted to meet their favorite crazies again: the weirdly reliable narrator Araragi, class president among class presidents Hanekawa, shady problem-solver Oshino, and a certain pale, blonde former vampire.

There are few authors in Japan who have reached the heights of success as NISIOISIN. Born in 1981, NISIOISIN left Ritsumeikan University in Kyoto, to pursue a career in story-telling. Initially he had ambitions to be a comic artist, but when he realized his art was not up to snuff, he began to focus on his writing. He would eventually win the 23rd Mephisto Prize, for Kubikiri Cycle (Del Rey), acknowledging his talents as a mystery writer, at the age of 20. Since his debut in 2002 he has penned more than 50 novels and a number of comics.

Nishio's works often cover themes of youth, but are framed in genres that are familiar to the masses. His works tend to mix mystery with comedy and touches or romance and/or the supernatural. He is a modern author in every sense, sometimes even experiementing with the Japanese language itself. Many of his works have been adapted into animated television series and films. His best known works are the Monogatari series and Katanagatari.