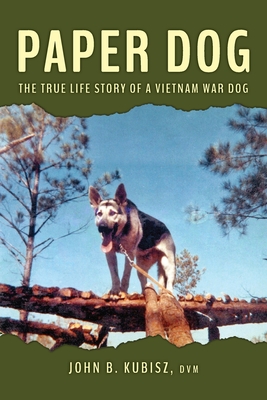 Paper is a scout dog with the 101st Airborne "Screaming Eagles". Gravely wounded in a Viet Cong ambush, his leg has been badly shattered by a high caliber bullet. After being carried for 48 hours before receiving treatment, his wound is now badly infected. But Paper is a very special scout dog who has saved countless lives...Everyone has given up on Paper, except for his handler, Tom Hewitt. Then Tom finds Dr. John Kubisz of the 764th Medical Detachment. Doc Kubisz agrees to see if there's anything he can do. If Paper's leg cannot be saved, he will be euthanized. Even if it can be saved, unless he regains its full strength, he will still be euthanized...And if Paper recovers, he and Tom will be sent back to the front line...

An estimated 3,800 dogs were deployed as scouts by the United States Army during the Vietnam War. "Paper Dog" is the amazing story of one of those dogs, and the incredible bond he develops with two very remarkable men; his handler and best friend Tom Hewitt, and Army veterinarian, Dr. John Kubisz. Together with his exceptional team of medical misfits at the 764th Medical Detachment known as the "Dirty Half Dozen," Dr. Kubisz goes to extraordinary lengths, not just to save Paper's life, but to rebuild his bullet-shattered leg - just so that he and Hewitt can return to the front line. "Paper Dog" is an emotional journey, of courage and devotion, human and canine, laced with more than a little caustic humor and disdain for the military hierarchy. John Kubisz clearly has much in common with Hawkeye Pierce of M*A*S*H - his veterinary skills matched only by his sense of humor and his ability to avoid disciplinary action from his superiors