Voices from the Past: The Comanche Raid of 1776 & Other Tales of New Mexico History (Paperback) 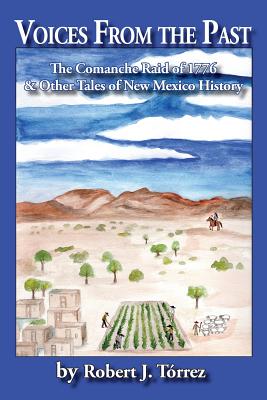 Voices From the Past: The Comanche Raid of 1776 & Other Tales of New Mexico History is an exploration of the vast treasure of untold and forgotten stories found in New Mexico's Spanish, Mexican, and Territorial period archives. Based on a monthly column the author has published since 1992, the stories in this volume will examine some of the accomplishments, triumphs, and tragedies experienced by individuals we probably did not learn about in history class. Learn about the Comanche raid of 1776 and what the historical record can tell us about victims of the raid; read about the devastation inflicted by the dreaded virguela, the smallpox epidemics that swept though entire communities in the eighteenth century and of how the smallpox vaccine was introduced to New Mexico in 1805; of Apache captives sold into slavery in the early eighteenth century; of New Mexican's struggle to prove their loyalty to the United States during the Spanish American War; of a stern frontier judge who could condemn a convicted murderer to hang and then write romantic letters to his wife; of the devastating Las Vegas fire of 1880; and of a "Chicago gangster" who hid out in northern New Mexico. These and four dozen additional "voices from the past" provide the reader with fascinating and little-known details about New Mexico history.

Robert J. T rrez was born and raised in the northern New Mexico community of Los Ojos and received his undergraduate and graduate education at Highlands University in Las Vegas and the University of New Mexico. He served as the New Mexico State Historian from 1987 until his retirement in December 2000. In addition to his monthly column Voices From the Past on New Mexico history, he is the author of five books on various aspects of New Mexico history and has contributed chapters to more than twenty books and anthologies, including a recent textbook for use in New Mexico schools.