Vicars of Christ: A History of the Popes (Paperback) 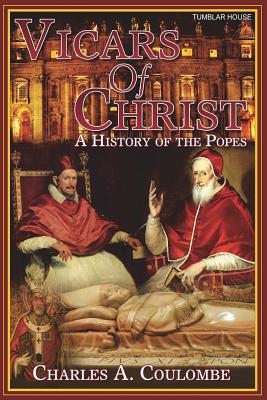 The Pope of Rome is the best known and most influential moral and religious leader in the world. Pick up the paper, turn on the T.V., and there he is. Every government in the world has to deal with him somehow. Love him or hate him, there is no denying his importance. It's this way today, and it's been this way since Emperor Constantine legalized Christianity in the 4th century.

In all that time, there have been wonder-working saints, lecherous murderers, and many, many mediocrities on the Papal throne - every kind of human being imaginable. Historically, the lives of Popes have been anything but dull and uneventful. Formosus was so hated by his successor, the corrupt Stephen VI, that his rotting corpse was disinterred and subjected to a court trial. St. Leo the Great frightened Attila the Hun into sparing Rome, while St. Gregory the Great banished the plague from the Eternal City by holding a procession. St. Leo III crowned Charlemagne Emperor by surprise on Christmas Day, but John XII (himself the son of a Pope) was killed by his mistress' lover, and died in her arms. John Paul II raised the popularity of the Papacy to incredible heights, played a huge role in bringing down Communism - and exorcised the Devil from a girl during a public audience.

Most books about the Popes have either tried to whitewash every sin any Pope has committed, or else have made them all out to be all out to be anti-Christs. On this emotional topic, writers seem to have left very little middle ground. But the truth is that there have obviously been good and obviously evil Popes, controversial Popes and forgotten Popes. In this book, they will all have their day in court. One by one, each Pope will be profiled, and their rich history, with all its pageantry, intrigue, holiness, and crime, will be unveiled.

This is the ultimate reference book on the popes

Charles A. Coulombe is one of North America's most respected and sought-after commentators on culture, religion, history, and politics. A specialist in the history and government of the Catholic Church, Coulombe's influence and expertise extend far beyond matters religious. He has written on topics ranging from the history of rum to haunted houses to a history of the United States. Mr. Coulombe is a social and political commentator of note. In 2005 he provided narration and commentary for ABC News during the funeral of Pope John Paul II and the subsequent election and installation of Pope Benedict XVI. A former journalist, Mr. Coulombe served as a film reviewer and Contributing Editor of the National Catholic Register, during which time he received the Christian Law Institute's Christ King Journalism Award. Coulombe's work has appeared in over than 20 journals, including regular columns in Fidelity (Australia), PRAG (London), Monarchy Canada, and Creole Magazine (Louisiana). He has also been a frequent contributor to such publications as Success, Catholic Twin Circle, Gnosis, FATE, and the New Oxford Review. As an informed and passionate speaker on a wide variety of religious, social, political, historical, and literary topics, Mr. Coulombe has appeared on lecture circuits throughout the North America, Europe, Australia, and New Zealand. In 1992 he lectured at Oxford University and the following year embarked on a lecture tour of Ireland and Great Britain, returning to Oxford and Cambridge in 1995. Coulombe has also delivered lectures at the University of Southern California on the history of Rock & Roll and at Cleveland's John Carroll University on the history of medieval monarchy. In February 2011, he was invited to take part in a debate on the abolition of the monarchy before the prestigious Oxford Union.