Hook Up: A Novel of Fort Bragg (Paperback) 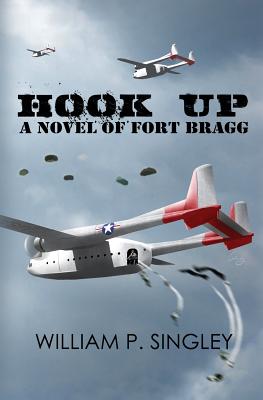 It was an Army between wars. Korea was a fresh memory for some soldiers and Vietnam was only an insignificant blip on the military radar. It was an Army in which reluctant draftees mixed with aimless volunteers looking for adventure and ways to test or confirm their manhood. In those days and in that Army, "hook-up" was a jump command for paratroopers rather than a romantic liaison.

Hook Up: A Novel of Fort Bragg takes us inside that Army and introduces fascinating characters who are struggling to become paratroopers and survive in a starch-stiff U.S. Army airborne regiment based at Ft. Bragg, North Carolina. Side-by-side in that demanding trek are officers like Lieutenant Sy Margolin, a potential nebbish who instead becomes a strong leader, and enlisted men like Privates Willie Patterson and Scott Breslin, who challenge authority every step of the way to winning their paratrooper wings.

In Hook Up we get a close-up, very personal, and fascinating look at an Army that no longer exists--an Army populated with soldiers who have either learned hard life lessons or are about to learn them in a crucible where failure can land you in the stockade or in the morgue. From the rigors of barracks life to the raucous off-post adventures to the thrilling jump sequences, Hook Up is a fast-paced, thrilling story of military excellence pursued and human innocence lost.