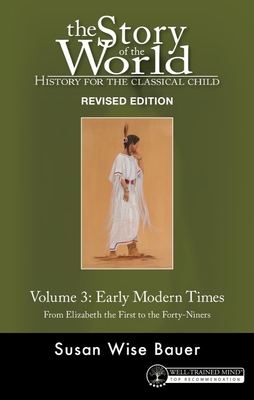 A beautifully revised edition of the classic world history for children.

Now more than ever, our children need to learn about the people who live all around the world. This engaging guide to other lands weaves world history into a storybook format. Designed as a read-aloud project for parents and children to share (or for older readers to enjoy alone), this book covers the major historical events in the years 1600-1850 on each continent, with maps, illustrations, and tales from each culture.

Over 1.3 million copies of The Story of the World have been sold.

Newly revised and updated, THE STORY OF THE WORLD, VOLUME 3 includes a new timeline, 40 brand-new illustrations, and a pronunciation guide for unfamiliar names, places, and terms.

Susan Wise Bauer is a writer, educator, and historian. Her previous books include the Writing With Ease, Writing With Skill, and Story of the World series from Well-Trained Mind Press, as well as The Well-Trained Mind: A Guide to Classical Education at Home, The Well-Educated Mind: A Guide to the Classical Education You Never Had, Rethinking School, The Story of Western Science: From the Writings of Aristotle to the Big Bang Theory, and the History of the World series, all from W. W. W. Norton. She has a Ph.D. in American Studies from the College of William & Mary in Virginia, as well as an M.A. in seventeenth-century literature and a Master of Divinity in Ancient Near Eastern Languages and Literature. For fifteen years, she taught literature and composition at the College of William and Mary.

Jeff West is an established illustrator and his variety and bulk of work is expansive, ranging from traditional art to art for TV and movies. He recently earned himself an Emmy nomination and has worked on blockbuster shows and films. He resides in Arizona.